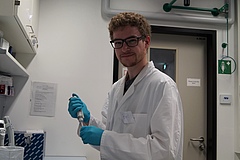 Bart Swinkels has joined the Molecular Interaction Ecology (MIE) group to conduct his MSc internship. He completed his Bachelor of Science in Molecular Life Sciences at the Radboud University Nijmegen  (RU) and proceeded with his studies at RU with the Human Biology specialization of the master programme Medical Biology.

Solanum dulcamara, commonly known as bittersweet nightshade, is a wild plant related to important agricultural crops such as potato, tomato and eggplant. As such, it shares the ability to synthesize steroidal glycoalkaloids (SGAs), which are compounds employed in the chemical defence by plants of the Solanum genus against various herbivores. Additionally, SGAs are anti-nutritional and, depending on their structure, toxic compounds for humans. Due to their importance in chemical defence and their anti-nutritional effects in humans, Bart believes investigating whether and how SGA composition is regulated in a tissue-specific manner can potentially bring large benefits to the cultivation of its agricultural relatives.

In recent years, many of the genes involved in SGA biosynthesis have been identified in domesticated tomato and potato, which helped explain the genetic origin of the large structural variety within the steroidal glycoalkaloids.  In his MSc project, Bart will investigate the tissue-specific expression of Solanum dulcamara homologs of genes involved in the biosynthetic pathway of steroidal glycoalkaloids from tomato. For this purpose, he will perform RT-qPCR on RNA samples from different tissues of an F1 S. dulcamara crossed line between an accession which was previously shown to contain exclusively unsaturated SGAs and an accession containing a mix of unsaturated and saturated SGAs.

During his stay at MIE, Bart will be supervised and assisted by Redouan Adam Anaia. This project is part of the DFG-funded Research Unit investigating the “Ecology and Evolution of Intraspecific Chemodiversity of Plants”.