The lynx is back in the Thuringian Forest

A camera trap provided the evidence: The lynx is back in the Thuringian Forest. (Picture: Dirk Hirsch)

This photo shows how the lynx marks a tree with its urine, a typical behaviour. (Picture: Dirk Hirsch) 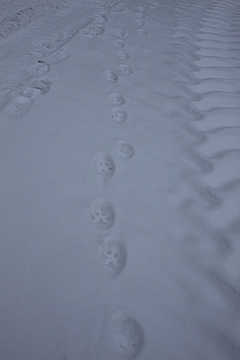 Also tracks of the lynx were found in the fresh snow. (Picture: Dirk Hirsch)

Leipzig/Oberschönau. With the support of a local nature conservationist, scientists from the iDiv research center and the Martin Luther University Halle-Wittenberg have found evidence for the presence of the lynx in the Thuringian Forest. North of the village of Oberschönau an adult individual was photographed by a camera trap. The photos proof unequivocally that the shy carnivore is back in the Thuringian Forest – 200 years after its dissapearance.