Urban life is not to everyone's taste 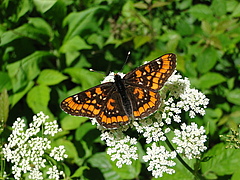 The scarce fritillary (Euphydryas maturna) feeds exclusively on ash trees and needs moist, light forests as a habitat. The species scored lowest among the 158 species studied for urban affinity and is likely to continue to decline in Europe. (Picture: Julia Whittman, @birdingjulia CC BY 4.0) 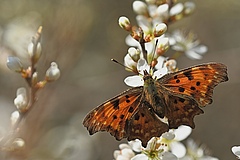 The southern comma (Polygonia egea) feeds on many different plants and is distributed in different climatic zones. Among all species studied, this one achieved the highest value for urban affinity. The southern comma should remain relatively unaffected by the current trend towards urbanisation. (Picture: Pixabay)

Halle/Jena/Leipzig. Rapidly expanding urban habitats are likely to endanger a large number of butterfly species in the long term. This is reported by scientists from the German Centre for Integrative Biodiversity Research (iDiv), the Martin Luther University Halle-Wittenberg (MLU) and the Friedrich Schiller University Jena (FSU) in the scientific journal Global Change Biology. Generalists that tolerate large temperature fluctuations and feed on many different plants are most likely to benefit from human-modified habitats. In order to preserve biodiversity, urban and spatial planning should take the needs of specialised butterfly species into account, the authors recommend.

Habitat change, for example through urbanisation, is one of the most important causes of biodiversity decline. By 2050, settlements and cities across the globe are predicted to increase by two to three million square kilometres – about half the size of Greenland. Natural and semi-natural habitats will thus gradually be replaced by urban habitats.
How wildlife can adapt to such fundamental changes has mostly been studied for a few species groups, such as mammals and birds.

“In order to make predictions about the development of biodiversity as a whole and to combat current phenomena such as insect declines, robust knowledge is also needed for other species groups,” says first author Dr Corey Callaghan from iDiv and MLU. “However, the data basis for such groups is much poorer. Butterflies offer the advantage of being popular with many people who volunteer to record their occurrences, which creates a relatively good database.”

Majority of butterflies threatened by urbanisation

To find out how butterflies respond to increasing urbanisation and which species can adapt to it, the scientists analysed more than 900,000 records of 158 butterfly species in Europe taken from the Global Biodiversity Information Facility (GBIF). This is the largest open-access portal for biodiversity data on all species, which also includes many volunteer-contributed data. The distribution data showed that the majority (79%) of butterfly species avoid cities. As many as 25 of the 158 species were more abundant in urban environments than in other habitats, led by the southern comma (Polygonia egea). The scarce fritillary (Euphydryas maturna) showed the least affinity to urban life. “It was surprising to find such clear patterns across the European continent,” says Callaghan. “The degree of urban affinity indicates which species are likely to be winners and losers from urbanisation in the future.”

Generalists are winners, specialists are losers of urbanisation

In addition, the researchers investigated which traits were typical for species with a greater affinity for cities. It turned out that generalists, in particular, are able to adapt well to the urban habitat, e.g. species that feed on many different plants and can withstand strong temperature variations. In addition, the winners generally showed relatively longer periods of flight activity during the year and reproduced several times a year. Specialised species, on the other hand, which depend heavily on a particular host plant or plant community and climatic conditions, are not coping as well in urban environments.

“With our method, we were able to show that species traits such as temperature and habitat preferences can be used as general proxies to predict which species are most sensitive to human activities in order to prioritise them for conservation measures,” says co-author Dr Diana Bowler from iDiv and FSU.

The needs of specialists must be considered by urban planning

In order to halt the loss of biodiversity through urbanisation, the authors see the need for urban and regional planners to ensure the presence of food species and host plants, especially of specialised butterflies. “However, every garden owner can also help by choosing to plant native plants”, Callaghan recommends.

“Our work clearly illustrates the power of citizen science and biodiversity data networks such as GBIF,” says senior author Prof Dr Henrique Pereira from iDiv and MLU. “Most of the butterfly observations we used from the GBIF database were collected by volunteers across Europe. Everyone can contribute to increasing knowledge about the impact of our lifestyles on biodiversity. One easy way people can get involved and contribute data is by using smartphone apps like iNaturalist or naturgucker which feed directly into the GBIF network and hence provide data across the globe for researchers to better understand how biodiversity is doing in an increasingly modified planet.”

This research was financed by the Deutsche Forschungsgemeinschaft (DFG; FZT-118).
Sebastian Tilch