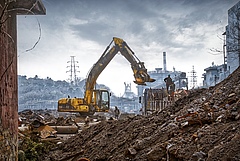 In a rapidly urbanising world, the conversion of natural habitats into urban areas leads to a significant loss of biodiversity. (Picture: allemii / Pixabay) 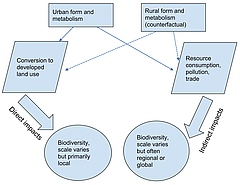 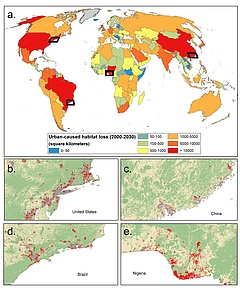 Researchers assess direct and indirect effects of urban growth on a global scale.

Leipzig/Halle/Arlington. In a rapidly urbanising world, the conversion of natural habitats into urban areas leads to a significant loss of biodiversity in cities. However, these direct effects of urban growth seem to be much smaller than the indirect effects outside of cities, such as the urban release of greenhouse gases causing climate change globally or the increasing demand for food and resources in cities leading to land-use change in rural areas. Both climate and land-use change are key drivers of global biodiversity loss. An international team of researchers including researchers from The Nature Conservancy (TNC), the German Centre for Integrative Biodiversity Research (iDiv), Martin Luther University Halle-Wittenberg (MLU) and other institutions assessed the direct and indirect effects on a global scale. The results have been published in the journal Nature Sustainability.

We are living in the period of fastest urban growth in human history, with more than 2 billion additional people expected in cities by 2030 – a pace that is the equivalent to building a city the size of New York City every 6 weeks. But what do scientists know and not know about how urban growth is affecting biodiversity? To answer this question, an international team of researchers reviewed more than 900 studies. The work of the highly international synthesis working group was funded and supported by sDiv, the synthesis centre of German Centre for Integrative Biodiversity Research (iDiv).

The researchers found that the direct effects of cities on natural habitat and biodiversity are large and straightforward to map using satellite data. Direct effects occur when urban areas expand, converting natural habitat into cities. Direct effects are cumulatively significant, with 290,000 km2 of nature habitat forecast to be converted to urban land uses between 2000 and 2030. This is equal to an area larger than the entire United Kingdom. Urban areas are causing the most destruction of high-biodiversity habitat in places like coastal China, Brazil, and Nigeria. This adds up to a big loss of biodiversity, because species richness (number of species) at a site is globally on average 50% lower at urban sites than in intact natural habitat.

However, the indirect effect of urban growth on biodiversity is likely far greater than the direct effect. Indirect effects include the biodiversity impacts of resources consumed within the city as well as the impacts of pollution released from cities. The researchers estimate that just the area required to feed the world’s cities is 36 times greater than the urban area of cities. “In other words, the food urban dwellers eat turns out to be more important for global biodiversity than the direct environmental impact of the urban areas”, said co-author Dr Andressa Vianna Mansur, postdoctoral researcher at iDiv. Similar conclusions can be made for other indirect effects, including the role of greenhouse gas emissions from cities in making climate change worse.

To date, much research has been done on the direct effects of urban expansion in particular cities or places – out of 900 studies, more than 600 dealt with the direct effects of urban growth. However, the effects of urban growth are not studied in the regions where the satellite data suggests the most intense effects. “Most studies are in developed countries like the United States and the European Union. Relatively few papers are from developing countries, where cities are expanding the most rapidly into high-biodiversity habitat”, commented first author Robert McDonald from The Nature Conservancy. “As a result, we don’t know much about the way ecosystems change in these habitats in response to urbanisation.”

This gap in the literature may have an effect on policymaking: “The lack of data on the significance of urban biodiversity loss in middle- and low-income countries could lead policymakers to underestimate the importance of the issue”, said Prof Henrique Pereira, research group head at iDiv and MLU. Moreover, there is a lack of information on how unique socioeconomic processes in developing countries, such as informal settlements (slums), affect biodiversity. “Only by closing these research gaps will society be able to make smart and informed decisions about how to protect biodiversity in an increasingly urban world."