Study: We need more realistic experiments on the impact of climate change on ecosystems 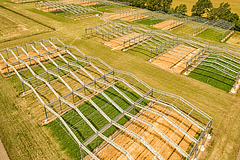 How do climate and land use affect ecological processes? In the Global Change Experimantal Facility (GCEF), an outdoor experiment in Saxony-Anhalt run by the Helmholtz Centre for Environmental Research - UFZ, scientists have been researching the consequences of the expected future changes in climate and land use since 2013. (Picture: André Künzelmann / UFZ)

When it comes to the impact of climate change on ecosystems, we still have large knowledge gaps. Most experiments are unrealistic because they do not correspond to projected climate scenarios for a specific region. As a result, we lack reliable data on what ecosystems might look like in the future, as a team of biodiversity researchers from Central Germany show in the journal Global Change Biology. The team reviewed all experimental studies on the topic. The researchers are now calling for the introduction of common protocols for future experiments.

The facts that climate change is man-made and that it will alter ecosystems are indisputable. However, there is debate about its extent and its consequences. “In order to predict how plant communities will react to climate change and what ecosystems of the future will look like, we need realistic field experiments worldwide,” says Humboldt Professor Tiffany M. Knight from Martin Luther University Halle-Wittenberg (MLU) and the Helmholtz Centre for Environmental Research (UFZ). She heads the group “Spatial Interaction Ecology” at the German Centre for Integrative Biodiversity Research (iDiv) Halle-Jena-Leipzig. According to Knight, field experiments are a necessary tool for understanding the effects of climate on plant communities. “Nature is complex and plant communities are structured by many interacting environmental factors. Experiments can specifically isolate the role of climate factors, such as precipitation and temperature,” says Knight.

The researchers conducted an extensive literature review on the subject, searching for field experiments on the relationship between climate factors and plant communities. “In these experiments, temperature and precipitation are altered to investigate their effects on the plant community,” explains Dr Lotte Korell, a member of Knight's research group and lead author of the study. The team was able to identify a total of 76 studies that manipulated either precipitation, temperature or both.

“We were surprised to find that most of the studies were not based on the actual climate forecasts for the specific geographical regions. In many cases they were not even close,” says Korell. According to her, this mismatch between the climate manipulations in field experiments and climate projections for the regions is due to many factors. Many of the experiments were set up to address questions unrelated to climate change, or were set up before more precise climate projections were available for some regions. “There’s nothing wrong with the science in those experiments. They are just not suited to answer the questions we are now asking”, says Tiffany Knight.

Depending on the region, current climate models project changes in precipitation of up to 25 per cent and higher temperatures of up to 5 degrees Celsius. However, almost all of the studies the team looked at manipulated much more extreme changes in precipitation, with values ranging from -100 and +300 percent. The temperature experiments, on the other hand, underestimated the climate forecasts for the worst-case scenario. “This is why we don’t have the data we need to forecast and plan for our future,” says Lotte Korell. “There is too little known about how ecosystems will react to climate change and how we can best manage our natural ecosystems to maintain the functions that are critical to humanity”, she continues. For example, it is unclear whether ecosystems react consistently to a changing climate or whether there are thresholds at which ecosystems react in a dramatic or even unexpected way. The team is therefore suggesting the establishment of global protocols that can be used to conduct climate experiments based on realistic projections.