Plant diversity in Germany on the decline 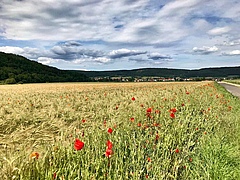 The study shows that even species that are considered widespread, such as the corn poppy (Papaver rhoeas), are steadily declining in Germany. (Picture: Sebastian Lakner) 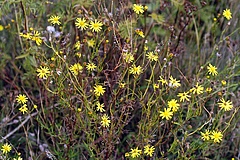 Man-imported species are on the increase in Germany, but their numbers cannot replace the loss of plant species. The narrow-leaved rattle (Senecio inaequidens) is originally native to southern Africa, but is now spread worldwide. (Picture: Helge Bruelheide)

Bonn/Halle/Jena/Leipzig. Germany's plant diversity is on the decline: over the last 60 years, decreases have been observed across Germany in over 70 percent of the more than 2000 species examined. The species dropped by an average of 15 percent. These are the findings of the most comprehensive analysis of plant data from Germany ever conducted, recently published in Global Change Biology. 29 million pieces of data on the distribution of vascular plants were taken into account in the analyses carried out within the framework of the "sMon - Biodiversity Trends in Germany" project of the German Centre for Integrative Biodiversity Research (iDiv). The study involved researchers from iDiv, the universities of Jena, Halle and Rostock, the Helmholtz Centre for Environmental Research (UFZ) and the Federal Agency for Nature Conservation (BfN) with the close involvement of the regional nature conservation agencies from all 16 federal states.

In an area covering the whole of Germany – in every grid field of approximately 5 by 5 kilometres – the decline in species diversity averages around two percent per decade. Especially vulnerable are the archaeophytes; species brought to Germany by humans before the discovery of America. Among others, these include a large proportion of accompanying field flora, such as the corn marigold and the large Venus’s looking glass, but also species such as the narrow-leaved rattle and the perennial goosefoot. On the other hand, many neophytes – those species that reached Germany after 1492, were also able to spread, such as the Himalayan balsam or the narrow-leaved ragwort. The results of this study make it clear that even this increase could not compensate for the loss in the number of species per unit of area.

For this study, the necessarily large and heterogeneous data sets were brought together, for the first time in Germany, and reliably statistically evaluated. Distribution data from 2136 of the over 4300 plant species established in Germany were included in the calculations. Species with very low reporting frequencies were not included. The foundation for this was the FlorKart database, in which the Federal Agency for Nature Conservation has collated data on the distribution of flora in Germany. This data is predominantly the result of intensive mapping work by volunteers; an endeavour which is indispensable for nature conservation. The data was supplemented by further data sets from universities and other scientific institutions, but also by information on the presence of plants from private individuals. Information gaps were filled by calculating the probability of plant occurrence.

BfN President Prof Dr Beate Jessel concludes: “This clearly shows, once again, that we have to rethink our approach to nature and landscape; after all, the population declines proven by the study extend over the whole of Germany. This leaves no doubt; we need a broad-based approach to agriculture and forestry, which together occupy 80 percent of the area of Germany. This demonstrates that there’s an urgent need for more nature-compatible forms of land use.”

Plant species brought in by humans (neophytes) are gaining ground

“The degree of clarity in these results really surprised us. They paint a very dismal picture of the state of plant diversity in Germany,” says first author Dr David Eichenberg of iDiv. “This study has confirmed that the declines are not limited to already rare or particularly endangered species, but that a gradual reduction of biodiversity in the majority of plant species in Germany has obviously been happening for a long time.”

The authors consider it likely that the observed decline in plant diversity has a major impact on biodiversity and ecosystem services. Due to the often very complex relationships between, for example, food webs and the cascade effect, such losses can have very serious consequences. It is evident that the intricate interrelationships between insects are affected, leading to decreases in both insect diversity and abundance.

However, the study also shows that data availability must continue to be improved in order to identify even subtle biodiversity losses as early as possible. In order to achieve this, the Federal Agency for Nature Conservation is currently setting out the basis for monitoring semi-frequent plant species in Germany. In contrast to rare species, where populations and occurrence are often well surveyed, with current recording methods, declines in semi-frequent and common species are only noticed late, or not at all.

This study was funded by, among others, the Deutsche Forschungsgemeinschaft (DFG; FZT 118) as part of “sMon - Biodiversity Trends in Germany”. sMon is an iDiv synthesis project with the aim of bringing together exemplary data sets on a variety of taxa and habitats in order to explore the possibilities for, and limitations of the analysis of changes in biodiversity. Based on this, prospects for future monitoring programmes in Germany are to be determined. Its integrative aspect is unique; bringing together government representatives from all federal states, scientists and members of various professional associations in one project.