The global number of land-dwelling insects is in decline. (Picture: Gabriele Rada) 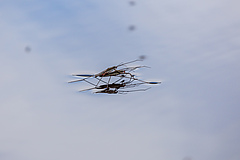 Contrary to the trend for land-dwelling insects, the number of freshwater insects has increased. This could be due to effective water protection measures. The photo shows common water striders (Gerris lacustris) while mating. (Picture: Oliver Thier) 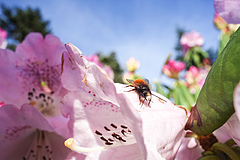 Some insects perform important functions in our ecosystems, such as pollination of wild and cultivated plants. The photo shows the European orchard bee (Osmia cornuta). (Picture: Gabriele Rada)

Leipzig. A worldwide compilation of long-term insect abundance studies shows that the number of land-dwelling insects is in decline. On average, there is a global decrease of 0.92% per year, which translates to approximately 24% over 30 years. At the same time, the number of insects living in freshwater, such as midges and mayflies, has increased on average by 1.08% each year. This is possibly due to effective water protection policies. Despite these overall averages, local trends are highly variable, and areas that have been less impacted by humans appear to have weaker trends. These are the results from the largest study of insect change to date, including 1676 sites across the world, now published in the journal Science. The study was led by researchers from the German Centre for Integrative Biodiversity Research (iDiv), Leipzig University (UL) and Martin Luther University Halle-Wittenberg (MLU). It fills key knowledge gaps in the context of the much-discussed issue of “insect declines“.

Over the past few years, a number of studies have been published that show dramatic declines in insect numbers through time. The most prominent, from nature reserves in Western Germany, suggested remarkable declines of flying insect biomass (>75% decrease over 27 years). This was published in 2017 and sparked a media storm suggesting a widespread “insect apocalypse”. Since then, there have been several follow-up publications from different places across the world, most showing strong declines, others less so, and some even showing increases. But so far, no one has combined the available data on insect abundance trends across the globe to investigate just how widespread and severe insect declines are. Until now.

An international team of scientists collaborated to compile data from 166 long-term surveys performed at 1676 sites worldwide, between 1925 and 2018, to investigate trends in insect abundances (number of individuals, not species). The complex analysis revealed a high variation in trends, even among nearby sites. For example, in countries where many insect surveys have taken place, such as Germany, the UK and the US, some places experienced declines while others quite close by indicated no changes, or even increases. However, when all of the trends across the world were combined, the researchers were able to estimate how total insect abundances were changing on average across time. They found that for terrestrial insects (insects that spend their whole lives on land, like butterflies, grasshoppers and ants), there was an average decrease of 0.92% per year.

First author Dr Roel van Klink, a scientist at iDiv and UL, said: “0.92% may not sound like much, but in fact it means 24% fewer insects in 30 years’ time and 50% fewer over 75 years. Insect declines happen in a quiet way and we don’t take notice from one year to the next. It’s like going back to the place where you grew up. It’s only because you haven’t been there for years that you suddenly realise how much has changed, and all too often not for the better.”

Insect declines were strongest in some parts of the US (West and Midwest) and in Europe, particularly in Germany. For Europe in general, trends became on average more negative over time, with the strongest declines since 2005.

Fewer insects in the air

When reporting about “insect decline”, the mass media have often referred to the “windscreen phenomenon”: people’s perception that there are fewer insects being splattered on the windscreens of their cars now compared to some decades ago. The new study confirms this observation, at least on average. Last author Jonathan Chase, professor at iDiv and MLU, said: “Many insects can fly, and it’s those that get smashed by car windshields. Our analysis shows that flying insects have indeed decreased on average. However, the majority of insects are less conspicuous and live out of sight – in the soil, in tree canopies or in the water.”

For the new study, the researchers also analysed data from many of these hidden habitats. This showed that on average, there are fewer insects living in the grass and on the ground today than in the past – similar to the flying insects. By contrast, the number of insects living in tree canopies has, on average, remained largely unchanged.

At the same time, studies of insects that live (part of) their lives underwater, like midges and mayflies, showed an average annual increase of 1.08%. This corresponds to a 38% increase over 30 years. This positive trend was particularly strong in Northern Europe, in the Western US, and since the early 1990s, in Russia. For Jonathan Chase this is a good sign. He said: “These numbers show that we can reverse these negative trends. Over the past 50 years, several measures have been taken to clean up our polluted rivers and lakes in many places across the world. This may have allowed the recovery of many freshwater insect populations. It makes us hopeful that we can reverse the trend for populations that are currently declining.”

Roel van Klink added: “Insect populations are like logs of wood that are pushed underwater. They want to come up, while we keep pushing them further down. But we can reduce the pressure so they can rise again. The freshwater insects have shown us this is possible. It’s just not always easy to identify the causes of declines, and thus the most effective measures to reverse them. And these may also differ between locations.”

Ann Swengel, co-author of the study, has spent the last 34 years studying butterfly populations across hundreds of sites in Wisconsin and nearby states in the US. She stresses how complex the observed abundance trends are and what they mean for effective conservation management: “We’ve seen so much decline, including on many protected sites. But we’ve also observed some sites where butterflies are continuing to do well. It takes lots of years and lots of data to understand both the failures and the successes, species by species and site by site. A lot is beyond the control of any one person, but the choices we each make in each individual site really do matter.”

Although the scientists were unable to say for certain exactly why such trends – both negative and positive – emerged, they were able to point to a few possibilities. Most importantly, they found that destruction of natural habitats – particularly through urbanisation – is associated with the declines of terrestrial insects. Other reports, such as the IPBES§ Global Assessment, also noted that land-use change and habitat destruction are a main cause of global biodiversity change.

This new study was made possible by iDiv’s synthesis centre sDiv, funded by the Deutsche Forschungsgemeinschaft (DFG). It is currently the most comprehensive analysis of its kind. It depicts the global status of insects and shows where insect protection is most urgently needed.

Media release on dramatic decline in insect numbers in Western Germany, which is mentioned in this media release:
https://www.ru.nl/english/news-agenda/news/vm/iwwr/2017/three-quarters-total-insect-population-lost/

Global Assessment Report of the Intergovernmental Science-Policy Panel on Biodiversity and Ecosystem Services (IPBES), which is mentioned in this media release:
https://ipbes.net/sites/default/files/2020-02/ipbes_global_assessment_report_summary_for_policymakers_en.pdf

An iDiv policy brief summarises the key findings of the study and offers policy recommendations for insect conservation:
https://www.idiv.de/fileadmin/content/Files_Science-Policy/iDiv_PolicyBrief01_20_Insects.pdf