How to avoid being eaten by your pollinators

During the night, a tobacco hawkmoth (Manduca sexta) uses its proboscis to suck nectar from a flower of the wild tobacco Nicotiana attenuata. Sensory neurons located on the tip of the proboscis respond to the floral volatile (E)-α-bergamotene (Photo: Danny Kessler, Max Planck Institute for Chemical Ecology). 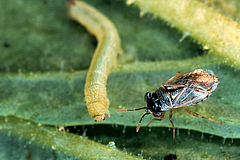 The tobacco hawkmoth Manduca sexta is an important pollinator of the wild tobacco species Nicotiana attenuata; yet hungry larvae hatch from the eggs these moths lay on the leaves. An interdisciplinary team of scientists at the Max Planck Institute for Chemical Ecology (MPI-CE) in Jena, Germany, has described a gene in Nicotiana attenuata which enables the plant to solve the dilemma that arises when a pollinator is also a dangerous herbivore. The gene NaTPS38 regulates the production of the volatile compound (E)-α-bergamotene. At night, the tobacco flowers produce this odor which is attractive to adult tobacco hawkmoths, while during the day, the tobacco leaves emit the compound to lure predatory bugs to feed on Manduca sexta larvae and eggs. The results have been published in the journal Current Biology. Among the authors is iDiv Junior Group Leader Meredith Schuman and two iDiv members, all from the MPI-CE.

Flowering plants depend on pollen vectors in order to reproduce. Yet a plant has a problem if a pollinator, which is attracted by the odors of sweet flowers, lays its eggs on the plant after pollination is complete, and from these eggs hatch voracious caterpillars ready to attack the tasty leaves with their enormous appetite.

Scientists from the Max Planck Institute for Chemical Ecology have discovered a gene in the wild tobacco species Nicotiana attenuata called NaTPS38, which regulates the production of an aromatic compound, the sesquiterpene (E)-α-bergamotene, in both flowers and leaves. “We observed that Nicotiana attenuata plants emit (E)-α-bergamotene in flowers at night to lure Manduca sexta moths as pollinators. The compound makes a moth keep its proboscis longer in a flower and pollination success is increased. The emission of the same compound in leaves attacked by Manduca sexta larvae during the day, however, attracts the predators of the larvae and acts as an indirect defense,” first author Wenwu Zhou summarizes. In this way, the tissue-specific emission of one compound helps the wild tobacco plants to interact most advantageously with Manduca sexta.

The study involved researchers from four different groups. Originally, Wenwu Zhou and project leader Shuqing Xu from the Department of Molecular Ecology wanted to study the genetic basis of (E)-α-bergamotene emission after herbivory. They found that the terpene synthase NaTPS38 was activated when insects attacked tobacco plants. Researchers from the Department of Biochemistry were able to confirm that NaTPS38 is indeed involved in the production of (E)-α-bergamotene. When the researchers examined the expression of NaTPS38 in different parts of the tobacco plants, they found to their surprise that the gene was also highly expressed in the flowers. However, the ecological function of (E)-α-bergamotene emission in flowers was still unclear. The fact that floral (E)-α-bergamotene was mainly emitted at night led to the hypothesis that the compound interacts with nocturnal pollinators, especially Manduca sexta moths.

Further analyses in the Department of Neuroethology demonstrated that the purified (E)-α-bergamotene activated neural receptors at the tip of the proboscis of Manduca sexta moths. Tent experiments with tobacco plants and hawkmoths performed by researchers from the Department of Molecular Ecology revealed that pollination success was increased when the flowers emitted high amounts of (E)-α-bergamotene.

Although the gene NaTPS38 is very similar to a monoterpene synthase, it is nevertheless responsible for the production of the sesquiterpene (E)-α-bergamotene. Usually a gene from the sesquiterpene synthase family regulates the production of such a compound, but in this case, it appears that the gene NaTPS38 violated this general rule. Analyzing the function and evolutionary history of NaTPS38 revealed that this gene originated from a duplication of a monoterpene synthase which then evolved the ability to produce (E)-α-bergamotene, a sesquiterpene compound. This unique evolutionary process likely occurred before the divergence of different Solanaceae species, the plant family which includes tobacco.The fact that a single gene in Nicotiana attenuata mediates both pollination and defense by producing tissue-specific (E)-α-bergamotene is an example of a phenomenon called ecological pleiotropy. “Accumulating evidence suggests that ecological pleiotropy may be quite common in plants. Our work demonstrates that interactions between different ecological factors, such as pollinators and herbivores, are important for plant evolution. However, we know little about the extent to which these interactions can affect the plant’s adaptation to its environment,” explains Shuqing Xu. The scientists are currently developing a new research program that aims to address this question systematically. [AO/KG]