Humans and nature: The distance is growing 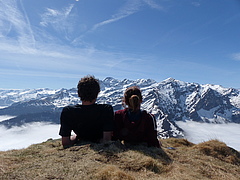 Outdoor activities such as visiting natural areas, here the Ariège Regional Park in France, play a key role in defining our relationship with nature and how we protect it.  (Picture: : Antoine Bel (license CC-BY-4.0)) 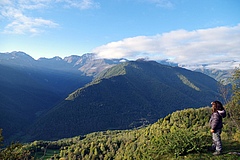 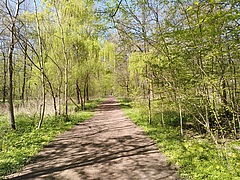 In the heart of the city of Leipzig, Germany, the forest around the Nonnenwiese offers residents a semi-natural space where adults and children can observe and interact with nature and different species. (Picture: Victor Cazalis (license CC-BY-4.0))

Meta-analysis of scientific literature shows decline of interactions with nature due to growing urbanisation, but systematic studies are rare

Leipzig/Moulis. Humans are living further and further away from nature, leading to a decline in the number of our interactions with nature. This is the finding of a meta-study conducted by a Franco-German research team at the German Centre for Integrative Biodiversity Research (iDiv), Leipzig University and the Theoretical and Experimental Ecology Station (SETE - CNRS). The researchers highlight that human experience of nature is crucial for developing pro-environmental behaviour and thus facing the global environmental crisis. The study has been published in Frontiers in Ecology and the Environment.

The idea that humans are facing a global extinction of experience of nature is popular, but there is poor empirical evidence of its reality. To shed more light on this, the scientists measured how the average distance from an individual’s home to the nearest area with low human impact changed in the last decade. They found that humans currently live 9.7 km away from a natural area on average, which is 7% further away than in the year 2000. Europe and East Asia have the highest average distance to natural areas, such as 22 km in Germany and 16 km in France. “What is striking is that all other countries in the world are following a similar pattern,” explains first author Dr Victor Cazalis, a postdoctoral researcher at iDiv and Leipzig University.

The authors also showed that tree cover within cities has declined worldwide since 2000, particularly in Central Africa and South-East Asia. “This finding suggests that the possibility for the urban population to access green spaces is reducing as well,” concludes Dr Gladys Barragan-Jason, a researcher at the Theoretical and Experimental Ecology Station and co-author of the study. “Indeed, the study reveals that the destruction of natural areas combined with a strong increase in urban population is leading to a growing spatial distance between humans and nature, especially in Asia, Africa and South America.”

In the same study, the authors systematically searched for scientific publications assessing a trend in experiences of nature: from direct ones such as hiking in national parks, to vicarious experiences like natural settings in cultural products like cartoons, computer games or books. They found that the number of studies assessing these trends was very low (N=18), with a strong bias towards the US, Europe and Japan. This shows that any claim about the extinction of nature experience is based on poor evidence and that more studies should investigate this question, especially in Africa, Latin America and Asia.
The 18 studies found by the authors show for instance a decline in visits to nature parks in the US and Japan, a decrease in camping activities in the US, and a decrease in the number of flower species observed by Japanese children. They also find signs of disconnection in the depletion of natural elements in novels, songs, children’s albums and animated movies, which are less and less imbued with natural imagery (as shown e.g. by a former iDiv study from 2021).

Despite these examples of decline, other interactions are stagnating or even increasing. Watching wildlife documentaries or interacting with wild animals in video games is, for example, more common than a few years ago. “New ways of digitally interacting with nature have certainly emerged or increased in recent decades,” says Gladys Barragan-Jason. “But several former studies show that these interactions have a lesser effect on our sense of connection with nature than direct interaction.”

“The knowledge about these human-nature interactions is crucial, as they are key in the construction of our relationship with nature and our behaviours,” says Victor Cazalis. We need to maintain a good connection with nature in order to enable the necessary societal transformations of the 21st century. Only then can humanity ‘live in harmony with nature by 2050’ as ambitioned by our governments through the Global Biodiversity Framework that is being discussed currently in the COP15 of the Convention on Biological Diversity.”

This research was financed inter alia by the Deutsche Forschungsgemeinschaft through its support of sDiv, the Synthesis Centre at iDiv (DFG; FZT-118).