A novel and efficient method for monitoring Asian otters 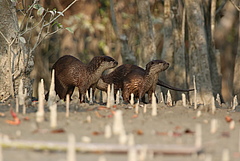 A group of the Asian small-clawed otter (Aonyx cinereus) in their tidal habitat of the Sundarban mangrove forest in Bangladesh. (Picture: Sandeep Sharma)

Report by Dr. Sandeep Sharma, Researcher of the Biodiversity Conservation research group at iDiv and Martin Luther University Halle-Wittenberg, and lead author of a new publication in Ecology and Evolution

South-east Asia is a melting pot of otters that are very difficult to monitor in the wild. We developed and tested a novel, accurate, and affordable DNA-based method to reliably identify three endemic Asian otter species in a paper published today in Ecology and Evolution. The protocol developed by our team of South Asian researchers from the Malaysian Nature Society, Sunway University, Department of Wildlife and National Parks (PERHILITAN), Peninsular Malaysia, Martin Luther University Halle-Wittenberg, and the German Centre for Integrative Biodiversity Research (iDiv) will help in monitoring and conservation of threatened otter species in Asia. We also highlight the importance and need of cost-effective and replicable techniques to advance biodiversity monitoring in highly biodiverse yet under-represented parts of the world.

Accurate and effective monitoring is critical to advance the scientific knowledge and status of biodiversity. South-East Asia, a global biodiversity hotspot, is also exposed to several human-induced threats that are pushing the species to peril. Four otter species co-occur in this part of the world, and not much is known about the distribution and population size of these species. They are threatened by habitat loss, illegal wildlife trade, pollution and degradation of aquatic habitat, human-otter conflict, and climate change. The rapidly growing Asian economy and associated infrastructural development such as roads are becoming another cause of otter mortality.

Otters, sentinels of freshwater ecosystems, are difficult to distinguish and monitor in wild due to their elusive nature and similarities in appearance among species. This calls for an advanced technique that is not only accurate and replicable, but also affordable to wildlife researchers of the region, who often work at shoestring research funding. With this objective, we developed a suite of PCR-RFLP analysis protocol that is also efficient in analysis of DNA sourced from non-invasive samples such as feces (spraints in case of otters). We tested this protocol on known reference samples, and further on spraint samples collected from otter habitat in Malaysia. Our technique has very high amplification success (97%) for reliable and efficient species identification of three Asian otter species. We anticipate that it helps in tracking the status of otter populations in South and South-East Asia.