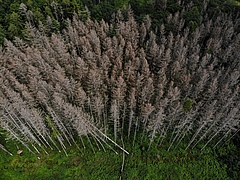 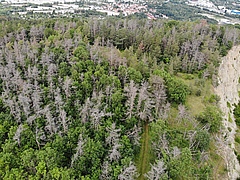 Leipzig. The world is experiencing two megatrends: Climate extremes are increasing in magnitude and frequency while biodiversity is declining. Writing in Nature, researchers from Leipzig University and the German Centre for Integrative Biodiversity Research (iDiv) with collaborators across Europe, express concern that these two trends can mutually exacerbate each other. The researchers call for a new research agenda emphasizing the interconnecting risks of climate extremes and biodiversity decline.

To date, awareness is growing that global warming and biodiversity loss are interconnected, even if driven by different mechanisms. If we want to fully understand one of these trends, we should not neglect the other. Consequently, the Intergovernmental Panel on Climate Change (IPCC) and the Intergovernmental Science-Policy Platform on Biodiversity and Ecosystem Services (IPBES) are calling for collaborative approaches to further investigate these interconnected topics.

One of the most salient features of climate changes is that extreme events will increase in intensity and frequency. Writing this week in Nature, a group of researchers from Leipzig University, iDiv and collaborating European institutions expressed particular concern that this specific process will interact with biodiversity decline. In particular, the researchers identified one question that has not yet been investigated at all when they ask whether “... more intense extremes, happening more frequently, accelerate the degradation and uniformization of ecosystems, which then, in turn, promote further climate extremes?” In other words: does the decline of biodiversity add to the magnitude of extremes? If this was true, and there is some evidence for this, a whole new research agenda would have to be developed.

To address this question, interdisciplinary approaches are needed. “Ecologists and climate scientists need to establish a joint scientific vision and agenda, so we are properly forewarned not just of the risks of removing biodiversity buffers against climate extremes, but also of the risk of amplifying extreme events themselves”, the researchers conclude.

The good news is that the necessary methods and tools for data collection and analysis as well as novel measurement techniques provide unique insights into plant responses to stress. But this data must be turned into predictions – with the help of high-quality models, digital twins and artificial intelligence methods.

High-level policy is starting to acknowledge the interconnectedness of climate extremes and biodiversity loss, for example by the European Commission’s formal recognition of the multifunctional value of forests and their role in regulating atmospheric processes as well as our climate. A few days ago, new climate policies were adopted at the UNFCC COP27 in Sharm El Sheikh; starting on 7 December, politicians will discuss new biodiversity policies at the CBD COP 15 in Montreal. In their comment in Nature, the researchers stress the need for better linking the research informing policies that target both climate and biodiversity: “Ecologists, climate scientists, remote sensing experts, modellers and data scientists need to work more collaboratively to fill our critical gaps in understanding, in order to thoroughly quantify the risk that lies ahead.”