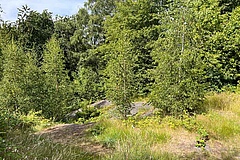 A German case study focuses on “urban rewilding” as a nature-based solution in the Ruhrgebiet area (Picture: Peter Keil)

Based on a media release by INRAE

Cestas/Halle. Terrestrial ecosystems throughout Europe face the twin threats of climate change and the loss of biodiversity. “Rewilding” could be an important ecological restoration solution to mitigate both of these issues, but up to now, it is mostly restricted to local initiatives scattered across the continent focussing on biodiversity objectives alone. The wildE project aims to assess the synergies between climate change mitigation, adaptation and biodiversity and thus to improve the potential of climate-smart rewilding as a nature-based solution for ecological restoration in Europe. wildE is funded by the EU Horizon programme and coordinated by the French National Research Institute for Agriculture, Food and Environment INRAE with the participation of the German Centre for Integrative Biodiversity Research (iDiv) and the Martin Luther University Halle-Wittenberg.

The rewilding approach proposes to “let nature (re)take care of itself”, often with temporary help at first, and benefit from natural processes to adapt ecosystems to climate change and support their biodiversity. This multidisciplinary research and innovation programme will address the link between climate and biodiversity in close association with the socio-economic dimension of large-scale restoration. It compares scenarios from various land uses, assesses associated risks and opportunities, and explores new approaches to make ecological restoration a socially and economically viable solution for local actors and communities.

wildE will provide scientific knowledge, methods and tools for different geographical, ecological and social contexts based on Europe-wide studies as well as individual case studies. Inter alia, a German case study in collaboration with Wageningen University and BSWR - Biologische Station Westliches Ruhrgebiet e.V. will focus on “urban rewilding” as a nature-based solution in the Ruhrgebiet area. Other case studies focus on large-scale remote areas such as the Tatra Mountains.

The project aims to help policymakers (the EU, national governments, regions, and local communities) and commercial companies to integrate ecological restoration through rewilding into their policy or management to achieve carbon neutrality, strengthen climate adaptation and reverse biodiversity loss.

These results will be widely communicated to a broad range of stakeholders (landowners, conservation managers, companies, society at large, etc.) to improve everyone's knowledge of these challenges and opportunities. This interactive sharing will be made possible in particular through a collaborative web platform, which will also function as a shared workspace for stakeholders.

wildE is supported by a team of 22 academic and non-academic partners (NGOs, companies, etc.) from 12 European and coordinated at INRAE in France.

“Climate mitigation by restoring ecosystems only works with large-scale measures. Rewilding can deliver the kind of upscaling that is needed for significant climate mitigation of European ecosystems,” says Prof Henrique Pereira, head of the Biodiversity Conservation Group at iDiv and leader of the wildE work package the conceptual framework on climate-smart rewilding. “This project will be the first to assess the potential of rewilding for climate mitigation in Europe. And to facilitate the implementation of climate-smart rewilding, we will identify priority areas.”

The Project is funded via the EU Horizon Europe programme with 8.5 Million Euros for four years.