The importance of light for grassland plant diversity 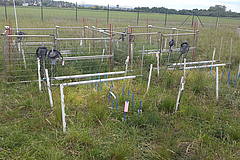 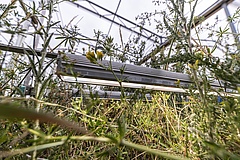 The researchers manipulated the light with the help of LED lamps. Photo: UFZ/André Künzelmann 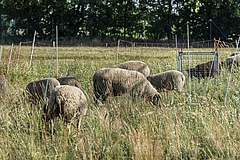 The interaction of light, eutrophication and grazing, in this case by sheep, was also tested. Photo: UFZ/André Künzelmann

Plants need light to grow. However, due to excess nutrients and/or the absence of herbivores less light can reach lower vegetation layers in grasslands. Consequently, few fast-growing species dominate and plant diversity declines. So far, this relationship has been established indirectly through experiments, but never directly by means of experimentally adding light in the field. Now, an international team of researchers including scientists from the Helmholtz Centre for Environmental Research (UFZ), the Martin Luther University Halle-Wittenberg (MLU) and the German Centre for Integrative Biodiversity Research (iDiv), was able to experimentally prove the dominant role of light competition for the first time. The results have been published in Nature.

The team of researchers led by Prof. Dr. Anu Eskelinen from the University of Oulu (Finland) used the Global Change Experimental Facility (GCEF) at the UFZ research station in Bad Lauchstädt for their experiments. Scientists from UFZ, iDiv and various universities use the GCEF platform to study the influence of different climate models and land use intensities on plant community structure – specifically food webs and interactions between species.

Anu Eskulinen, who spent several years at the UFZ and iDiv as a visiting scientist, used a new experimental approach: the team directly illuminated the low-growing plants in the grassland with LED lamps, thus increasing the amount of light. In addition to this treatment, fertilisers were applied on some plots and grazing by sheep was used on others.

The experiment showed a sharp decline in species richness and biodiversity as a result of artificial fertilisation if the areas were not grazed at the same time. When the researchers added LED lamps, the loss of species richness was mitigated. Later, the researchers excluded sheep from half of the plots, which caused species richness and diversity do decline. At the same time, the total vegetation cover increased without grazing, which, in turn, reduced the light available to plants. Importantly, adding light to the understorey plants mitigated this loss of diversity. "These results suggest that herbivory is a dominant factor controlling competition for light and plant diversity," says first author Anu Eskelinen.

The research team believes that the results from the field trials should be taken into account for future grassland management and conservation policies. "Our results highlight the importance of conserving native herbivores and using sustainable grazing as a management measure," Anu Eskelinen further emphasises.

Prof. Dr Stan Harpole, co-author and head of the department of Physiological Diversity at UFZ and iDiv, adds: “This study highlights the value of carefully designed manipulative field experiments, which we need so we can strongly test the causes of diversity loss. We could only advance our understanding and test the theory in more realistic conditions because of the excellent infrastructure of the UFZ’s Global Change Experimental Facility and the support provided at the Bad Lauchstädt Research Station, and the cooperation with iDiv.”

This study was mainly funded by the Academy of Finland and UFZ.

Original publication
(Researcher with iDiv affiliation and alumni are in bold)