Habitat mapping data can fill gaps in knowledge on biodiversity 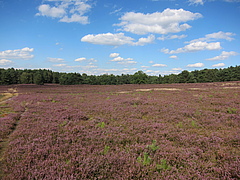 Data gathered by habitat mapping programs can make important contributions to biodiversity research. They provide insight into changes of the local flora since the 1980s – a period that is covered by hardly any other sources of information. A team from the Martin Luther University Halle-Wittenberg and the Hamburg Authorities for the Environment, Climate, Energy and Agriculture has now shown how research can benefit from this historic habitat mapping data using habitat maps of the city and federal state of Hamburg as an example. Their results, which have been published in “Ecosphere”, also show a clear decline of species-rich habitats due to urbanization over the last decades.

In Germany, habitat mapping programs (Biotopkartierungen) have been carried out in almost every federal state since the 1980s. Similar sources exist in many other European countries. “The mapping programs are carried out by the authorities to obtain an overview of natural and semi-natural habitats for landscape planning and nature conservation,” says Lina Lüttgert from the Institute of Biology of MLU. These datasets contain comprehensive data on all habitats of the local flora and fauna. Often, they also include information on the plant species found in these areas. This makes the data interesting for research: „They can provide insight into the changes over the last decades. Also, we do not have any other systematic surveys on local diversity from that period,” says Lüttgert.

Together with a team from the Hamburg Authorities for the Environment, Climate, Energy and Agriculture, the researchers from Halle analyzed the habitat mapping data from Hamburg. Their analysis revealed, for example, decreases in area covered by species-rich (semi-)dry grasslands and increases in species-poor habitats. At the same time, human settlements have significantly increased. With the help of the habitat mapping data, the team was able to show that plant species adapted to certain habitats usually had a hard time colonizing other habitats.

According to the researchers, the trends revealed by the data from Hamburg are in line with findings from other regions in Germany and Europe. “In many places, we find that moderately common species are most threatened, while other more common species benefit from the habitat changes,” says Prof Dr Helge Bruelheide, professor for Geobotany at MLU and member of the German Centre for Integrative Biodiversity Research (iDiv). According to Bruelheide, the study shows how biodiversity research can benefit from data sources that have, so far, hardly been used. “The data is buried in the archives of many authorities, but hold a great potential.”

The new study is an outcome of the project “sMon - Biodiversity Trends in Germany”, which is coordinated by iDiv and financed inter alia by the Deutsche Forschungsgemeinschaft (DFG; FZT-118). As part of this initiative, data on the development of biodiversity throughout Germany are being compiled and analysed. To this end, researchers are teaming up with public institutions and nature conservationists.