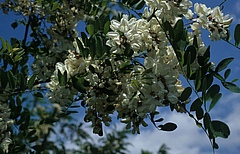 Black Locust (Robinia pseudocacia) is a tree native to North America that has been introduced in all continents. European empires have played a major role in its introduction and spread. (Picture: Franz Essl)

Based on a media release by the University of Vienna

Vienna/Leipzig. Alien floras in regions that were once occupied by the same European power are, on average, more similar to each other compared to outside regions and this similarity increases with the length of time a region was occupied. This is the conclusion of a study by an international team of researchers led by the University of Vienna and with the participation of researchers from the German Centre for Integrative Biodiversity Research (iDiv). The results were recently published in the scientific journal Nature Ecology and Evolution.

The global redistribution of ‘alien species’, i.e. species originally not native in a specific geographic region, is closely linked to human movement which accelerated with the onset of European exploration and colonialism in the late 15th century. Back then, European powers introduced species mainly for economic reasons in order to ensure the survival of their population and to foster the establishment of settlements, next to aesthetic and nostalgic reasons. In particular, many plant species were introduced to and from the colonized regions for food, fodder or horticulture and have, over time, established ‘alien floras’ in these regions.

The longer a region was occupied by an empire, the more similar the alien floras

“The European empires restrictive trade policies ensured that plants were predominantly traded between regions occupied by the same power. Hence, the set of species exchanged between regions was restricted to the extent of the empire, and consequently, the regions became more similar in their floras compared to outside regions – a process that intensified with the length of time a region was occupied by the empire”, says the lead author of the study Bernd Lenzner from the University of Vienna. The study shows that this process is equally important as other drivers of the spread of alien species, such as socio-economic development or population density in a region, that explain how alien plant species are distributed today.

Strategic and economic importance of a region increases floristic similarity

Furthermore, regions that played an important economic or strategic role in the empires show even greater similarity in their alien floras compared to all other regions of an empire. Such regions include, for example, former trade hubs like regions in the Indo-Malay Archipelago that were crucial for the international spice trade. Similarly, this also applies to islands like the Azores or St. Helena, which were both important stopover destinations on long trans-oceanic voyages. The researchers state that dependencies based on historic European empires prevail to this day, manifested, for example, in the existence of overseas territories or common languages between regions of the world that still shape preferential trade and hence the exchange of alien plant species.

“With this study, we have successfully shown that the effects of human activity, in this case, the planting of alien plants, can be seen within the same colonies for centuries to come. can still be seen for centuries in today's floras,” says Dr co-author Marten Winter from iDiv. “Human colonisation has in some cases drastically altered ecosystems”.

The scientists emphasize that understanding the past is essential to draw lessons for the future: “We knew that it may take decades for alien species to establish and spread within a region they have been introduced to and that this process often unfolds with a substantial delay”, says the senior author of the study Dr Franz Essl from the University of Vienna. “However, it is remarkable to be able to detect such legacies after several decades, sometimes even centuries, after the collapse of European empires. This shows that we need to be very careful and aware of which species we move around the globe, as they will likely have lasting impacts on biodiversity and human livelihoods far into the future”.