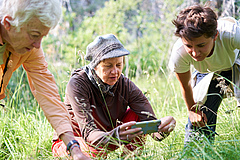 Data points have been recorded using iNaturalist across the globe. The density varies, with more entries collected in some regions of the world, especially in parts of North America and Europe. (Picture: Adapted from the publication) 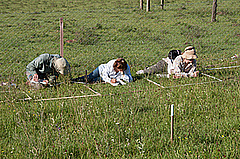 Collecting plant trait data is enormously time-consuming and hardly possible across the board. By linking different databases, knowledge gaps can be partially filled. (Picture: Valério Pillar)

Leipzig. Missing knowledge in the global distribution of plant traits could be filled with data from species identification apps. Researchers from Leipzig University, the German Centre for Integrative Biodiversity Research (iDiv) and other institutions were able to demonstrate this based on data from the popular iNaturalist app. Supplemented with data on plant traits, iNaturalist input results in considerably more precise maps than previous approaches based on extrapolation from limited databases. Among other things, the new maps provide an improved basis for understanding plant-environment interactions and for Earth system modelling. The study has been published in the journal Nature Ecology and Evolution.

Nature and climate are mutually dependent. Plant growth is absolutely dependent on climate, but this is, in turn, strongly influenced by plants, such as in a forest, which evaporates a lot of water. In order to be able to make accurate predictions about how the living world may develop, extensive knowledge of the characteristics of the vegetation at the different locations is necessary, for example, leaf surface size, tissue properties and plant height. However, such data usually have to be recorded manually by professional scientists in a painstaking, time-consuming process. Consequently, the available worldwide plant trait data are very sparse and cover only certain regions.

The TRY database, managed by iDiv and the Max Planck Institute for Biogeochemistry in Jena, currently provides such data on plant traits for almost 280,000 plant species. This makes it one of the most comprehensive databases for plant characteristics mapping in the world. Up to now, global maps of plant traits have been created using extrapolations (estimation beyond the original observation range) from this geographically limited database. However, the resulting maps are not particularly reliable.

In order to fill large data gaps, the Leipzig researchers have now taken a different approach. Instead of extrapolating existing trait data geographically from the TRY database, they have linked it to the vast dataset from the citizen science project iNaturalist.

With iNaturalist, users of the associated smartphone app share their observations of nature, providing species names, photos and geolocation. In this way, more than 19 million data points have been recorded, worldwide, for terrestrial plants alone. The data also feeds the world's largest biodiversity database, the Global Biodiversity Information Facility (GBIF). This is accessible to the public and also serves as an important database for biodiversity research.

In order to test the accuracy of the maps based on the combination of iNaturalist observations and TRY plant traits, they were compared to the plant trait evaluations based on sPlotOpen; the iDiv sPlot platform is the world's largest archive of plant community data. It contains nearly two million datasets with complete lists of plant species which occur in the locations (plots) studied by professional researchers. The database is also enhanced with plant trait data from the TRY database.

The conclusion: The new iNaturalist-based map corresponded to the sPlot data map significantly more closely than previous map products based on extrapolation. “That the new maps, based on the citizen science data, seem to be even more precise than the extrapolations was both surprising and impressive,” says first author Sophie Wolf, a doctoral researcher at Leipzig University. “Particularly because iNaturalist and our reference sPlotOpen are very different in structure.”

“Our study convincingly demonstrates the potential for research into voluntary data,” says last author, Dr Teja Kattenborn from Leipzig University and iDiv. “It is encouraging to make increasing use of the synergies between the combined data from thousands of citizens and professional scientists.”

“This work is the result of an initiative of the National Research Data Infrastructure for Biodiversity Research (NFDI4Biodiversity), with which we are pushing for a change in culture towards the open provision of data,” says co-author Prof Miguel Mahecha, head of the working group Modelling Approaches in Remote Sensing at Leipzig University and iDiv. “The free availability of data is an absolute prerequisite for a better understanding of our planet.”

The study was financed inter alia by the Deutsche Forschungsgemeinschaft (DFG; FZT-118) and Future Earth/bioDISCOVERY .