Ecological imbalance: How plant diversity in Germany has changed in the past century 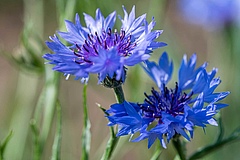 The cornflower or bachelor's button (Centaurea cyanus) has been among the “losers”; its population has declined considerably over the past 100 years. (Picture: A. Künzelmann/UFZ)

Halle. Germany’s plant world has seen a greater number of losers than winners over the past one hundred years. While the frequencies and abundances of many species have shrunk, they have significantly increased in others. This has resulted in a very uneven distribution of gains and losses. It indicates an overall, large-scale loss of biodiversity, as a team led by the Martin Luther University Halle-Wittenberg (MLU) and the German Centre for Integrative Biodiversity Research (iDiv) reports in Nature.

It’s a weird paradox: While global biodiversity is lost at an alarming rate, at the local level, many studies are finding no significant decreases in animal and plant species numbers. “However, this doesn’t mean that the developments are not worrying,” warns Prof Helge Bruelheide, an ecologist at MLU and iDiv. After all, it also depends on which species we are talking about. For example, if survival artists that are specially adapted to peatlands or dry grasslands are displaced by common plants, the number of species often remains, in total, the same. However, diversity is still being lost because the once very distinct vegetation of different habitats is now becoming more and more similar.

To find out how strong this trend is in Germany, the team led by MLU and iDiv looked at a multitude of local studies. Numerous experts provided data from more than 7,700 plots whose plant populations were surveyed between 1927 and 2020. These studies, some of which have not been published before, cover a wide range of habitats and provide information on nearly 1,800 plant species. This includes about half of all the vascular plant species that grow in Germany. “Such time series can provide very valuable information,” explains Dr Ute Jandt from MLU and iDiv. This is because very precise botanical censuses can be conducted in plots that are often only ten or twenty square metres in size. “It is highly unlikely that plants disappear or reappear unnoticed in such plots,” Jandt adds.

An analysis of the data shows a negative abundance trend for 1,011 of the species studied and a positive trend for 719. In other words, there have been 41 per cent more losers than winners over the last hundred years. “Even more surprising is that the losses were distributed much more evenly,” says Bruelheide. The team discovered this using the Gini coefficient, which is usually used to analyse the distribution of income and property. The index shows, for example, that in many countries across the globe, a small number of rich people are getting richer while the vast number of the poor are getting poorer. Germany’s plant world is seeing a very similar trend: the losses are more evenly distributed among the many losers, while the gains are concentrated among fewer winners.

The latter group includes, for instance, the black cherry and the northern red oak, both of which originated in North America but have now also taken over many forests in Germany. The frost-sensitive European holly has also gained more and more ground in the course of climate change. The large camp of losers, on the other hand, consists of many types of agricultural weeds such as the cornflower, meadow species such as the small scabious, and wetland specialists such as the devil’s bit.

According to the study, the strongest imbalance between gains and losses occurred between the late 1960s and the early 21st century. “This phase started with the strong intensification of land use. Since then, however, there have been successful nature conservation measures that have weakened the still ongoing negative trend to a certain degree,” says Bruelheide.

No one knows yet whether this also applies to other regions of the Earth. That is why the team advocates collecting and evaluating similar datasets from around the world. This uneven distribution of gains and losses can be taken as an early warning sign of biodiversity changes which will ultimately lead to the extinction of species.

The new study is an outcome of the project “sMon - Biodiversity Trends in Germany”, which is coordinated by iDiv and financed inter alia by the Deutsche Forschungsgemeinschaft (DFG; FZT-118). As part of this initiative, data on the development of biodiversity throughout Germany are being compiled and analysed. To this end, researchers are teaming up with public institutions and nature conservationists.

The dataset this new Nature study is based on was also recently published in Scientific Data and is available to anyone interested: Jandt U., Bruelheide H. et al. ReSurveyGermany: Vegetation-plot time-series over the past hundred years in Germany. Scientific Data (2022). DOI: https://doi.org/10.1038/s41597-022-01688-6