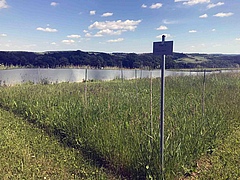 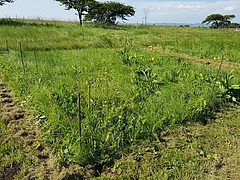 Researchers find the processes behind species decline due to nutrient inputs

Leipzig. With high nutrient inputs in grasslands, more plant species get lost over longer periods of time than new ones can establish. In addition, fewer new species settle than under natural nutrient availability. With a worldwide experiment, researchers led by the German Centre for Integrative Biodiversity Research (iDiv), the Helmholtz Centre for Environmental Research (UFZ) and the Martin Luther University Halle-Wittenberg (MLU) have now been able to show why additional nutrient inputs reduce plant diversity in grasslands. Another finding was that the increase in biomass with nutrient inputs is due to a few plant species that can use higher nutrient inputs to their advantage and remain successfully at a site over long periods of time. The results have been published in the journal Ecology Letters.

One of the reasons for the global threat to biodiversity is that we humans introduce more nutrients into our environment than would naturally be present there, for example, when fertilising agricultural land. In addition, precipitation re-distributes excess nutrients to other areas, and nutrients can also enter our soils through air pollution.

Natural grasslands are a habitat for many different plant species including grasses, herbs, wildflowers and orchids, many of which can be threatened by human activities and impacts. Plants need three things to grow: carbon dioxide (CO2) from the air, water and nutrients from the soil. The latter are usually scarce in semi-natural European meadows. Although this limits the growth of individual plants, it favours the possibility of many different species growing side by side. Excessive amounts of nutrients, however, create the image that is ubiquitous in our landscape today: lush green meadows but without the colourful flowers of former times.

It has long been known that excess nutrients reduce biodiversity, but until now the process behind it has been unclear. Researchers from iDiv, UFZ and MLU have now investigated the causes of this phenomenon in collaboration with a large international team. To do this, they recorded the plant species community on fertilised and unfertilised grassland in experiments at 59 sites on six continents over a period of 13 years.

“The composition of plant species in grasslands always varies slightly; that is quite normal,” says Dr Emma Ladouceur, lead author of the study and a scientist at iDiv and UFZ. “For some species, the conditions in one year are not optimal, and they can only produce a few seeds, or no new plants emerge from them. On the other hand, other species whose seeds were already in the soil or were carried in by wind or animals can germinate. Through these processes, different species occupy new spaces in natural areas. The higher the species diversity, the higher the probability that species adapted to the living conditions are present and are providing ecosystem services humans depend on.”

As expected, this experiment also consistently showed a decline in species on the nutrient-enriched plots through time. In order to be able to attribute the observations to changes in plant species, the scientists divided the plant communities into three categories: Species that were permanently present at a site over the entire study period, species that disappeared, and those that newly arrived.

In addition, the researchers recorded the aboveground biomass produced. As expected, the biomass of the harvested plants was higher on the fertilised trial plots than on the unfertilised ones, observable in the first year of experiments. About 60 % of this increase was due to plant species that were permanently present at a site. The remaining 40 % of the biomass was produced by newly added species, although fewer new species were added each year than on the unfertilised experimental plots.

“Our results show that when unnaturally large amounts of nutrients are present, a few species benefit particularly,” says Emma Ladouceur. “Many other not-so-competitive species fall by the wayside - we lose them, and new species have a hard time establishing and taking hold.”

“Our study makes a significant contribution to better understanding the effects of unnatural nutrient inputs on our biodiversity,” says senior author Prof Stanley Harpole, head of the Physiological Diversity Research Group at UFZ, iDiv and MLU. With their study, the researchers are also providing valuable information for practical nature conservation. “For nature conservation areas next to an agricultural area, it is important to know how the run-off of nutrients affects the semi-natural ecosystem so that targeted measures can then be taken to protect it,” says Harpole.

The study was conducted within the framework of the international research network NutNet (Nutrient Network), founded in 2005, and funded by the German Research Foundation (DFG; FZT-118), among others. The experimental sites are distributed over six continents (two sites in Asia, four in Africa).