Global study: Few of the ecologically most valuable soils are protected 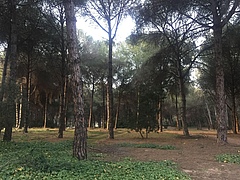 The soils of this pine forest in Seville were included in the study. (Picture: Manuel Delgado Baquerizo) 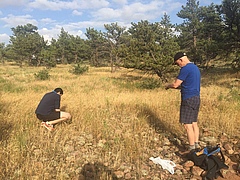 Halle, Leipzig, Seville. Current protected areas only poorly cover the places most relevant for conserving soil ecological values. This is the conclusion of a new study published in the journal Nature. To assess global hotspots for preserving soil ecological values, an international team of scientists measured different dimensions of soil biodiversity (local species richness and uniqueness) and ecosystem services (like water regulation or carbon storage). They found that these dimensions peaked in contrasting regions of the world. For instance, temperate ecosystems showed higher local soil biodiversity (species richness), while colder ecosystems were identified as hotspots of soil ecosystem services. In addition, the results suggest that tropical and arid ecosystems hold the most unique communities of soil organisms. Soil ecological values are often overlooked in nature conservation management and policy decisions; the new study, published in Nature, demonstrates where efforts to protect them are needed most.

Soils are a world of their own, hidden beneath our feet and bursting with life. They are home to billions of earthworms, nematodes, insects, fungi, bacteria and many other organisms. And yet, we are hardly aware of these organisms or their profound impacts on ecosystems. Without soils, there would be little life on land and surely no humans. In fact, most of the food we consume depends directly or indirectly on soil fertility. However, soils are also vulnerable to climate and land-use change. To better conserve soil ecological values, we must know where their protection is needed most. For plants and animals living above the soil, hotspots of biodiversity were identified decades ago. However, no such assessment was or could be made for soil ecological values until now.

Soil ecological values peak in contrasting regions of the planet

The results show that each of the three dimensions peaked in different regions of the planet. For instance, temperate ecosystems showed the highest local soil species richness, while biodiversity uniqueness peaked in arid ecosystems and the tropics. First author Dr Carlos Guerra explains: “When you dig into a European soil, for instance, in a forest, you will find many different species in one single spot. When you go to a forest some kilometres further, while different, you will find similar species. Not so in the tropics, where a few kilometres can mean completely different communities.” Guerra started working on the project at iDiv and MLU and is now affiliated with iDiv and Leipzig University. Unlike the two dimensions involving biodiversity, ecosystem services – the third dimension assessed – typically peaked in the colder high-latitudinal ecosystems.

The contrasting spatial patterns found for the three different dimensions demonstrate how complex it is to protect all three of them at once. “It is much more challenging than for plants and mammals, where there is usually a better spatial match of the different dimensions,” says Carlos Guerra. “When it comes to protecting soils, we should probably not focus on locally maximising all soil ecological dimensions at the same time but rather on integrated approaches that highlight the local potential.” Despite these difficulties, the researchers were able to identify ecosystem hotspots that should have the highest priority for soil nature conservation. These hotspots were located mainly in the tropics, in North America, in Northern Europe, and in Asia.

The researchers compared these priority hotspots to those areas that are already protected. They found that half of the hotspots identified are currently not under any form of nature conservation. “Protected areas have been selected mostly for conserving plants, birds or mammals,” says senior author Dr Manuel Delgado-Baquerizo from the Instituto de Recursos Naturales y Agrobiología de Sevilla. “We need to include soils, their biodiversity and services in our perspective. Therefore, governments and decision-makers need to set soil nature conservation as a priority in the context of the international negotiations for the 2030 biodiversity targets.” The new study may prove helpful here as it demonstrates where soil nature conservation efforts are needed the most.