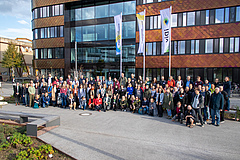 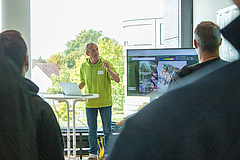 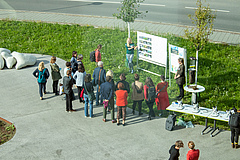 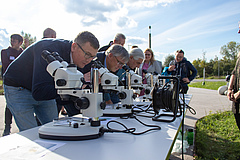 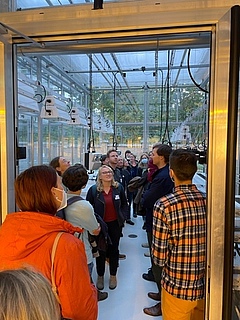 On 29 September 2022, the iDiv administrator networking event iDay took place at the iDiv Core Centre and the Botanical Gardens Leipzig. For the third time, the Central Services team invited colleagues from the administrations of iDiv’s four hosting institutions – Martin Luther University Halle-Wittenberg, Friedrich Schiller University Jena, the Leipzig University and the Helmholtz Centre for Environmental Research – UFZ. Following a discourse on administrative topics, in particular critical tasks surrounding the iDiv permanency post-2024, guests were able to get a glimpse of select research projects of various iDiv working groups as well as a tour of the new iDiv Core Centre. In the evening, participants joined at the Botanical Gardens Leipzig for a networking get-together and viewed iDiv’s high-tech research greenhouse, which is in operation since 2021.

iDiv Managing Director Sabine Matthiä on the event: “Due to the complexity and the many special features that the administration of a centre operated in three locations and across federal state lines entails, iDay has become particularly important for fostering exchange and networking between administrators as well as for sharpening a common understanding and joint sense of ownership for iDiv.”