Historical reduction of the wolf in the Iberian Peninsula 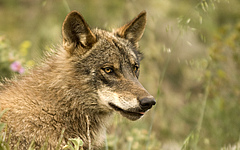 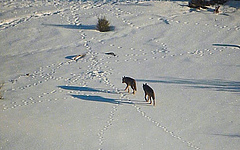 Two wolves roaming in the snow in the mountains of León in Northwestern Spain. (Picture: A. Gil-Fernández) 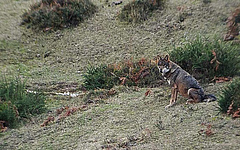 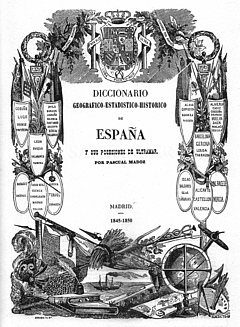 The Diccionario geográfico-estadístico-histórico de España y sus posesiones de Ultramar is a geographic handbook of Spain. Originally published in 16 volumes between 1845 and 1850, it was edited and directed by Pascual Madoz.  (Picture: Tony Rotondas - Wikimedia Commons)

Recent expansions mean little more than a stabilisation of the species

Based on a media release of the Consejo Superior de Investigaciones Científicas, Spain (CSIC)

Seville/Leipzig. The distribution of the wolf covered at least 65% of the Iberian Peninsula in the mid-19th century. Compared to this finding, recent expansions mean little more than a stabilisation of the species.This is the result of a study led by the Doñana Biological Station of the Consejo Superior de Investigaciones Científicas (EBD-CSIC)in collaboration with the German Centre for Integrative Biodiversity Research (iDiv) and the Martin Luther University Halle-Wittenberg (MLU). To reach these conclusions, the research team analysed the historical information from a geographical survey collected in the mid-19th century. The study has been published in the journal Animal Conservation. It provides new information on the history of wolf declines due to human persecution.

Humans are both witnesses to and drivers of biodiversity loss on the planet. Populations of numerous species are dwindling and disappearing from many places. “The knowledge we have of these declines comes from comparing indices that describe the distribution and abundance of species over time,” explains Dr Miguel Clavero, researcher at the EBD-CSIC and lead author of the paper. “However, the data needed to calculate these indices have only very recently started to be collected, while the impacts of human activities have been occurring for centuries. For this reason, perceptions of recent declines and the supposed ‘expansion’ of some species may be a mere thumbnail of actual declines.

The wolf was present in all provinces

The geographical dictionary edited by Pascual Madoz in the mid-19th century was a titanic collective effort, with more than 1,400 participants, who described every Spanish population centre and geographical feature. Wild animal species are among the elements often included in the descriptions, mainly those considered useful – those hunted or fished, or harmful - wolves and other carnivores. The team responsible for this study reviewed more than 11,000 pages of the dictionary to compile and locate on the map over 1,500 mentions of the wolf, distributed throughout all the provinces of mainland Spain.

According to Dr Néstor Fernández, researcher at iDiv and MLU and co-author of the study, “this information is very interesting in itself, but the historical distribution of the wolf cannot be derived directly from it.” The reason is that historical species accounts are typically very incomplete, so for many places, the fact that the wolf is not mentioned cannot be taken for its absence. To solve this problem, the research team developed mathematical models that described the relationship between historical species records and human pressures such as agriculture and population density. They then estimated the distribution of the wolf in Spain in the mid-19th century. “These models allow us to estimate the probability that the wolf was present in all the Iberian Peninsula, including areas where there is a lack of historical data,” says Fernández.

The results showed that wolves occupied more than 317,000 km2, that is, more than 65% of the surface area of mainland Spain. According to Dr Fernández, this figure puts the magnitude of the wolf decline in full perspective. “Comparing the current situation with the historical distribution, the area occupied today would represent just over 30% of the historical area reached in the middle of the 19th century.”

The current “expansion” of the wolf

The distribution of the wolf in Spain reached a minimum around 1980. Since then, the species has recolonised some areas, although the estimated number of groups has remained practically unchanged. These recent changes have sometimes been interpreted as an expansion of wolf numbers, and several voices have called for the need for population control through culling. In contrast, the recent inclusion of the wolf in the Spanish List of Protected Wild Species imposes strong limitations on such controls. “In such a confrontational situation, it is very important to have a historical perspective on the conservation status of wolves taking long-term extinctions into consideration, not only the partial recovery of the species in recent years,” says Fernández. This recently published work shows that the analysis of historical documents combined with modern surveys provides a more complete understanding of species conservation trends.

This media release is also available in Spanish.