National parks - islands in a desert? 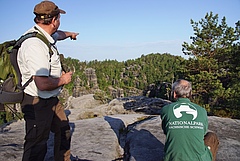 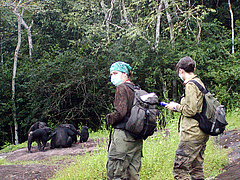 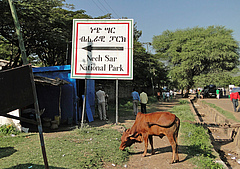 One of the studied parks was the Nech Sar National Park, Ethiopia. Human populations and domestic livestock live in the surroundings of the park and can cause human-wildlife conflicts in and outside the national park. (Picture: Commons Wikimedia, https://commons.wikimedia.org/wiki/File:Sign_for_Nechisar_National_Park.jpg) 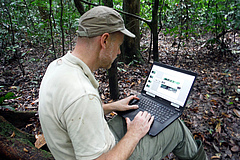 Leipzig/Jena/Bonn. How effective is biodiversity conservation of European and African national parks? This seems to be strongly associated with societal and economic conditions. But even under the most favourable conditions, conservation efforts cannot completely halt emerging threats to biodiversity if conditions outside of the parks do not improve. This is the conclusion of a new study led by the German Centre for Integrative Biodiversity Research (iDiv), the Max Planck Institute for Evolutionary Anthropology (MPI EVA), and the University of Bonn, in collaboration with the Helmholtz Centre for Environmental Research (UFZ), Leipzig University, the Friedrich Schiller University Jena and many other institutions. The study published in the journal Nature Sustainability highlights the urgent need for a better design of national park networks.

Despite commendable conservation efforts and investments by governments, NGOs and international as well as national conservation agencies, biodiversity continues to decline across the globe. One of the key strategies to halt biodiversity decline is the establishment of protected areas like national parks, which are supposed to provide favourable conditions for biodiversity to remain stable.

An international research team led by iDiv, MPI-EVA, and the University of Bonn, in collaboration with the UFZ, Leipzig University, the Friedrich Schiller University Jena and many other institutions has now investigated the biodiversity conservation effectiveness of 114 national parks in 25 countries in Africa and Europe on the basis of changes in abundances of 464 mammal and bird species. Within the surveyed ten-year period from 2007 to 2017, they found that the effectiveness of the 66 African and 48 European parks strongly depended on the respective local and national economic and societal conditions - which are reflected in the Human Development Index (HDI). A likely explanation is that resource demand from national parks is higher and less regulated when the HDI is low, making the parks less effective. The parks located in countries with highest HDI values showed average declines in species abundance of about 10% compared to more than 25% in parks located in countries with lowest HDI.

National parks do not guarantee 100% protection

“But we also found that seemingly effective national parks embedded in favourable socioeconomic context (such as high HDI) are not necessarily a generic solution for ideal national park management”, says lead author Dr Tsegaye Gatiso, researcher at the University of Bonn and iDiv. “Finally, no socioeconomic conditions and no set of currently implemented conservation measures can guarantee the elimination of threats to biodiversity. Species may still decline in the same national park under less favourable conditions because protected areas are an inseparable part of a dynamic, complex social-ecological system.”

"Many national parks have become 'islands in a desert of industrial agriculture, forestry and infrastructure'. The poor ecological conditions outside national parks reduce the species' abundance. After all, they do not orient their distribution areas to national park boundaries set by humans. If they are then exposed to a variety of negative living conditions outside the parks, this also affects their abundance inside the parks," adds the study's senior author, Dr Hjalmar Kühl, a scientist at iDiv and MPI-EVA. "It is therefore important that the ecological conditions outside the parks are significantly improved. Protected areas, and especially national parks, are sensors for the state of our planet's biodiversity. The lack of effectiveness of observed parks must be taken very seriously, and we must make great efforts to significantly improve the network of protected areas in terms of its ecological functionality."

Original Publication:
(Researchers with iDiv affiliation and alumni in bold)