Junior researchers investigate the impact of human activities on soil 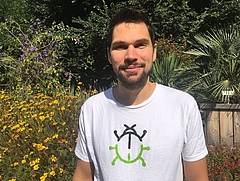 Leipzig. “Mysterious but beautiful” – this is how Dr Anton Potapov describes the world of organisms that live under our feet. Starting on 1 July 2022, the ecologist and microbiologist is setting up a new junior research group at the German Centre for Integrative Biodiversity Research (iDiv) and Leipzig University. It will take a closer look at the role of soil organisms in the ecosystem. Potapov’s work during the coming years will receive 1 million euros in funding through the German Research Foundation’s (DFG) Emmy Noether Programme.

At least 25 per cent of species on earth live in the soil. Complex food webs exist between soil-dwelling animals – such as insects, arachnids and earthworms – and microorganisms and plants. Potapov and his team want to study these food webs more closely and gain a better understanding of how they function in the ecosystem. The focus is also on what influence humans have on belowground food webs and how they thus influence soil ecosystem services such as carbon storage, plant growth and water supply.

“Among other things, our projects will investigate the role of soil animals in the carbon cycle of forests,” Potapov explains. “When we plant a certain tree type in a certain soil type, for example, we change the ecosystem in complex ways. We know little about how soil organisms react to this. My goal is to better understand and predict these reactions and, more importantly, how these reactions then affect the functioning of the entire ecosystem.”

In setting up his research group at iDiv and Leipzig University, the Emmy Noether Programme of the German Research Foundation (DFG) is supporting Potapov to the tune of 1 million euros.
Anton Potapov studied in Moscow and received his doctorate in ecology and microbiology in 2015. Most recently, he worked as a postdoctoral researcher in the Department of Animal Ecology at the University of Göttingen.