The Gollum effect and its impacts on the scientific community 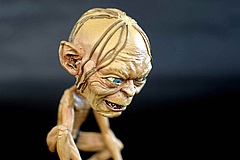 Gollum from Lord of the Rings (Picture: Denys Korobov/Pixabay)

Report by Dr Jose Valdez, Postdoctoral Researcher of the Biodiversity Conservation research group at iDiv and Leipzig University, and senior author of a new publication in Frontiers in Ecology and Evolution

While scientific research is becoming increasingly more collaborative, the ability to freely conduct research remains restricted by established researchers who feel they have the sole right to study specific study sites, model organisms, research topics, and sometimes even entire scientific fields. Like Gollum from The Lord of the Rings, they become possessively attached and guard these aspects of their research. In our recent publication in Frontiers in Ecology and Evolution we refer to this as the 'Gollum effect' and explore ways in which this can be overcome to promote scientific openness and lead science into a new era where it is dispensed fairly instead of at the hands of a selected few.

The Gollum Effect is a pervasive issue deeply embedded into academic research culture that severely hinders scientific progress and disproportionally affects marginalized groups and early career researchers. The guarding of research opportunities can be attributed to the increased competitiveness in academia for funding, publishing opportunities, permanent positions, or scientific prestige. While rarely discussed, accounts of researchers who have been prevented from conducting independent research by those that laid claim to specific topics and ideas are likely widespread.

The most typical behaviour is being disparaged or suppressed from conducting a research study by those who believe they have the sole right to do so. In some cases, when a researcher reaches out for a possible collaboration, they are dissuaded by the Gollum, who falsely claims they were already considering doing the same study or refuse to give their ‘permission’ unless they are provided with co-authorship, even if unwarranted. In the worst cases, they simply steal the research idea and publish it as their own. Other common behaviours include bullying, retaliation, or discrediting individuals and their work. Such research guarding can help prevent competition from others while also minimising the risk of research being published that counters their own. The result is a power imbalance, with those with an already established career on a particular species, site, or topic controlling the direction of future research and ensuring they maintain their power.

Those disproportionately impacted by the Gollum Effect are early career researchers, graduate students, and disenfranchised groups who already face these extreme power imbalances while trying to forge a career or obtain a degree. These individuals are particularly at risk since they don’t want to harm their careers or lose their projects, access to resources, publications, or letters of recommendation. For many, these issues eventually force them out of science ultimately, taking with them the unique perspectives and ideas that allow scientific fields to progress and expand.

Combatting the Gollum Effect requires a culture that helps researchers remain passionate about science and able to feel free to conduct research without limitations. This demands scientific openness, where research topics, study sites, species, and scientific fields remain accessible. While collaborations should be favoured, scientists should not feel they have to ask permission from others to research a specific topic. More importantly, they should not fear retaliation if they want to study a subject heavily guarded by an established researcher.

Established and senior researchers play a key role by not remaining neutral when they notice inappropriate behaviours. Additionally, although early career researchers and students may not have much power alone, together they can be a powerful voice and effect change by demanding better policies, transparency, and accountability. Lastly, every researcher should be aware of their own behaviours. Just as the ring slowly enslaved the unassuming Sméagol, the hyper-competitiveness and steep hierarchical culture of academic research can drive any scientist to inadvertently become the wretched Gollum.

We are all part of this scientific community, and combatting the Gollum effect requires systemic change and collaborative action by all of us, regardless of position or power. Together we can cast the ring into the fire and begin a new era where research is not dictated by a selfish few but accessible to all.
Jose Valdez