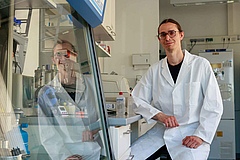 Halle/Leipzig. The German Research Foundation (DFG) has accepted the biologist Dr Michael Gerth into the Emmy Noether Programme and will fund his work with up to 1.4 million euros in the coming years. With this funding, Gerth will move from the UK to the Martin Luther University Halle-Wittenberg (MLU) and establish his own working group at the German Centre for Integrative Biodiversity Research (iDiv). His research focuses on the evolution of special bacteria, which live in flies, bees and other insects.

The bacteria of Gerth's research focus often provide substantial benefits to their host animals: these tiny 'roommates' can, for example, produce important nutrients such as vitamins, or toxins that help ward off parasites. The relationship between bacteria and host may even deepen to the point where the bacteria affect the animal’s reproduction. In some insects, the offspring can also develop from unfertilised ovules; in bees, this is how the male drones develop. “Wolbachia bacteria can manipulate their host in such a way that only female offspring are born, which are central to the transmission of the bacteria,” says Dr Michael Gerth.

Some bacteria also move between different animal species. “So far, little is known about what makes bacteria successful when changing hosts and what effects their new environment has on them, for example how their genetic material evolves as a result of the change,” says Gerth. This is where the new iDiv Junior Research Group “Symbiont Evolution” comes in: In laboratory experiments with various species of the Drosophila fruit fly, Gerth's team will investigate how the DNA of Spiroplasma bacteria changes when they are transferred from one species to another. In studies with wild bees, the genetic material of Wolbachia bacteria will be examined in more detail.

“We want to find out which strains are found particularly often and which are particularly rare in wild bees. By comparing the genomic data from the laboratory and from nature, we will investigate whether there are genetic patterns which can be associated with successful host transfer," says Gerth. The influence of environmental factors, such as rising temperatures, on these processes will also be examined.

The biologist has found optimum conditions for his research in Central Germany: “iDiv offers a unique research environment in Germany and very good infrastructure for my work. MLU has an internationally renowned zoology department whose topics complement my areas of research very well,” says the scientist.

Michael Gerth was born in 1985 and studied biology at Leipzig University from 2005 to 2010. In 2015 he obtained his doctorate there with a thesis on Wolbachia bacteria in bees. Subsequently, he spent two years conducting research on a European Union Marie Sklodowska Curie Fellowship at the University of Liverpool in the UK and, until recently, worked as a lecturer at Oxford Brookes University.

The DFG's Emmy Noether programme is aimed at outstanding early career researchers. By independently leading a junior research group over a period of up to six years, they are prepared to satisfy the prerequisites for appointment as a professor. The programme is named after the mathematician Emmy Noether who, at the beginning of the 20th century, was the first German woman to become a university lecturer in the field of mathematics.