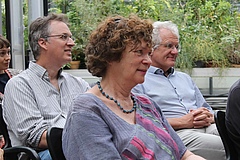 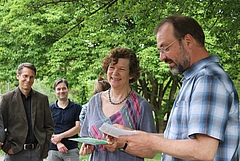 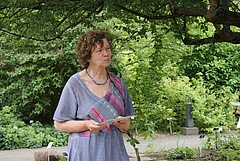 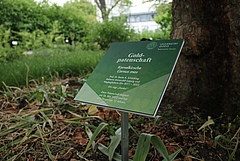 Role of the former Rector of Leipzig University for iDiv acknowledged

Leipzig. iDiv has honoured Professor Beate A. Schücking’s many years of commitment to the German Centre for Integrative Biodiversity Research (iDiv). During a ceremony on Monday, iDiv presented her with a tree sponsorship in the Leipzig University Botanical Garden. As Rector of the university and as a member of the iDiv Board of Trustees, Professor Schücking has played a major role in the success story of the research centre over the past eleven years.

On Monday afternoon, representatives of iDiv and Leipzig University gathered in the university’s botanical garden. There, a laudatory speech, pictures, and a musical contribution by the jazz duo Timm-Brockelt commemorated the individual stages of her many years of commitment to iDiv. To thank her for her extraordinary commitment to biodiversity research and to the research centre, the staff of iDiv gave her a sponsorship for a Cornelian cherry in the Botanical Garden. The event ended with a relaxed get-together in beautiful spring weather.

Laudator Prof Aletta Bonn, member of iDiv’s management board, paid tribute to Professor Schücking’s pioneering role: "As the first female rector in Leipzig University's 600-year history, she has significantly shaped the reach and appeal of the university with a modern, vigorous management style. She has created and opened spaces, allowed her teams to shine and develop their strengths. With her level-headed, calm, and strategically astute leadership, she has successfully formed and consolidated alliances and broken new ground in cooperation in Saxony and across state borders. She has thus enshrined a new integrative science style and inspired us all. Biodiversity needs people like Professor Schücking."

iDiv Speaker Prof Christian Wirth compared Professor Schücking's work with the characteristics of the Cornelian cherry (lat. Cornus mas): "Similar to the Cornelian cherry, as Rectorc, you were a jack-of-all-trades and all-round provider as a rector: medical doctor, philosopher, psychotherapist by training and later, even a designer, administrator, entertainer, moderator, decision-maker, fighter, arbitrator, ... and the list goes on. I always found it remarkable how patiently and gently you dealt with the university. Above all, the Cornelian cherry has a very deep ‘heart root system’. That's what you did, Professor Schücking: you rooted yourself in the University of Leipzig with a lot of heart, very deeply and intensively - and thus tracked down the nutritional forces for the development of the university. We are very grateful to you."