More than four million euros for research on trees and shrubs 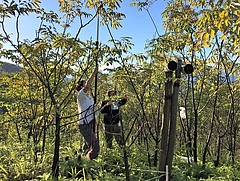 Doctoral researchers of the Research Training Group during fieldwork in the BEF-China experiment. (Picture: Rémy Beugnon) 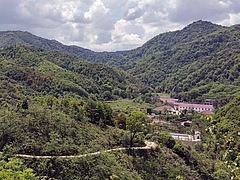 Halle/Leipzig/Jena/Beijing. The International Research Training Group TreeDì can continue its work. On Friday, the relevant Grants Committee of the Deutsche Forschungsgemeinschaft (DFG, German Research Foundation) approved its continued funding with more than four million euros until 2027. The programme is conducted in cooperation with the Martin Luther University Halle-Wittenberg (MLU), the Friedrich Schiller University Jena and Leipzig University as well as the University of the Chinese Academy of Sciences (UCAS). The aim of the research is to better understand the interactions of trees and shrubs in forests. On the German side, the doctoral researchers work and interact at the German Centre for Integrative Biodiversity Research (iDiv), and a large number of iDiv scientists are involved in the TreeDì research and qualification programme, for example, in teaching.

The first phase "balance sheet" of the International Research Training Group (IRTG) is impressive: so far, four completed doctorates and 33 publications in internationally recognised journals, including Science Advances, Ecology Letters and Global Change Biology. "This is a great summary and shows that you can conduct top-class international research even during a pandemic," says group spokesman Prof Helge Bruelheide from MLU and a member of iDiv.

The IRTG started in 2018. Since then, the focus has been on how trees in a forest interact and cooperate with each other, for example by exchanging nutrients via roots and fungal partners. The doctoral projects focus on the underlying processes and mechanisms of this cooperation. "Forests are among the most important ecosystems in the world because they bind large amounts of carbon dioxide, play a key role in the regulation of the climate and are a habitat for numerous animal species," says Bruelheide.

Several trips to China were originally planned for the research work; special, ‘custom-designed’ forests with over 200 different combinations of tree species have been planted there as part of the world's largest biodiversity experiment "BEF-China". However, from 2020, German on-site research had to be suspended due to the pandemic. "Instead, we carried out a large greenhouse experiment here in Germany. We sowed twelve tree species from China, let them grow in special test containers and observed their interactions," says Bruelheide. Long-term experiments being carried out at the Helmholtz Centre for Environmental Research (UFZ) Research Station Bad Lauchstädt in southern Saxony-Anhalt were also used. Bruelheide continues, "So, we had our own, smaller, on-site biodiversity experiment with which we could compare German and Chinese tree species." In addition to the scientific findings, experience regarding the management of an international research project and strategies for dealing with the pandemic situation was shared with the scientific community in a journal article.

In the new funding phase, until 2027, work on tree-tree interactions will be intensified and a new focus will also be added. “There are large numbers of shrubs between the trees. They are the second layer in the forest and even dominate many ecosystems. So far, however, they have been severely underrepresented in research,” says Bruelheide. Therefore, some of the projects in the new funding phase will investigate how trees and shrubs interact with each other. One question, for example, is whether shrubs plug into the trees’ subterranean fungal networks or form their own. This will also enable clarification of how species diversity can increase the stability of forest ecosystems.

Of the 18 new doctoral positions to be made available in the next funding period, half are in Germany and half in China. In addition to the bilateral research programme, doctoral researchers benefit from made-to-measure career development programmes and reciprocal research exchange visits in Germany and China. "We are pleased to be able to continue and expand the close scientific cooperation and international exchange with the IRTG," says Prof Yanfen Wang, the spokeswoman on the Chinese side. At the UCAS in China, and at iDiv, run by the Universities of Halle, Jena and Leipzig in cooperation with the Helmholtz Centre for Environmental Research (UFZ), an excellent research environment is available.