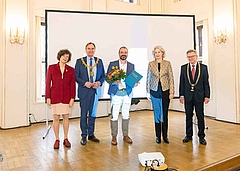 Based on a media release by the City of Leipzig, Leipzig University and the Saxon Academy of Sciences and Humanities in Leipzig

Leipzig. This year’s Leipzig Science and Humanities Prize goes to Christian Wirth, who is a professor for special botany and functional biodiversity at Leipzig University, a Fellow at the Max Planck Institute for Biogeochemistry in Jena, and Speaker of the German Centre for Integrative Biodiversity Research (iDiv). With this prize, the City of Leipzig, Leipzig University and the Saxon Academy of Sciences and Humanities in Leipzig honour researchers who meet the highest academic standards and thus reinforce Leipzig’s reputation as a city of science with a national and international reputation for its research and education landscape.

iDiv is particularly enthusiastic about the award: were it not for its founding director, the iDiv research centre would never have been formed.

Professor Henrique Pereira, research group head at iDiv and Martin Luther University Halle-Wittenberg says on behalf of the iDiv Speaker Board: “Christian Wirth is one of the founding fathers of iDiv and has led iDiv to become the top biodiversity research centre worldwide in under a decade. This is a truly remarkable achievement that we owe to his unique leadership talent, which combines a selfless dedication to the institution, a devotion to biodiversity research, and a deep calmness in handling the most difficult conflicts. In addition, he continues to be an active researcher himself, doing cutting edge science, teaching and training a new generation of researchers, always with a kind hand. It’s truly an honour to have Christian as our colleague and iDiv Speaker.”

Professor Nico Eisenhauer, research group head at iDiv and Leipzig University, adds: “Researchers often see themselves as ‘dwarfs standing on the shoulders of giants’. Christian Wirth is one such giant. He has shaped Leipzig and Central Germany as a centre of science in a unique way and helped it gain international visibility. He is a successful researcher, a popular university lecturer and a highly gifted science communicator. A more deserving laureate could not have been chosen. We are grateful and proud to be able to work with, learn from, and benefit from Christian Wirth. It is an honour to stand on his shoulders!”

In October 2012, Wirth served as founding director of the German Centre for Integrative Biodiversity Research (iDiv), of which he has been first a director and then a speaker. Almost ten years after its establishment, iDiv is an internationally recognised beacon of biodiversity research and has established a new field of research.

Furthermore, Professor Wirth has shaped the field of biodiversity research in a variety of capacities. For example, he is a member of the Ständige Senatskommission für Grundsatzfragen der biologischen Vielfalt of the Deutsche Forschungsgemeinschaft (DFG), represents the subject of biodiversity as a fellow in the Max Planck Society and serves as a reviewer for the German Science and Humanities Council. In addition, he is a founding member of the Research Initiative for the Conservation of Biodiversity (FEdA) of the Federal Ministry of Education and Research (BMBF) and an adviser for the establishment of the National Monitoring Centre for Biodiversity (NMZB). Professor Wirth regularly advises the City of Leipzig and Saxon Forestry Offices on environmental issues and in 2020 was appointed by the Minister of the Environment of the Free State of Saxony as a scientific expert to a working group on the future of the Leipzig floodplain forest.

In Leipzig, Professor Wirth leads the Leipzig Canopy Crane research facility, where he works closely with scientists in chemical ecology on questions related to plant defence mechanisms. He is also significantly involved in globally renowned collaborative projects on biodiversity funded by the DFG. Since 2021, Professor Wirth has led the Fact Check Biodiversity project, which has received 3 million euros in funding from the BMBF. For this project, around 100 representatives from universities, government agencies, and associations are working together to develop a national assessment for the conservation of biodiversity.

The award is endowed with 10,000 euros. A voluntary jury of nine researchers selects the prize recipients.