Trees call for help from birds and predatory insects 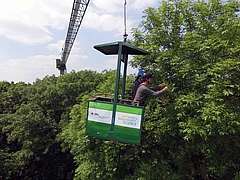 The "cry for help" has been demonstrated for the first time in the natural habitat - in the canopy of the Leipzig floodplain forest. (Picture: Steffen Schellhorn) 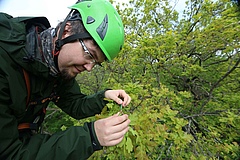 The researchers also placed plastic caterpillar dummies on these leaves and recorded damages from beaks and bites. (Picture: T. Volfová) 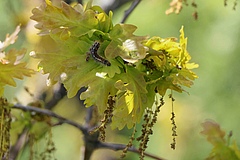 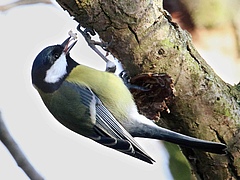 Even birds (often great tits in this study area) can “decode” the chemical signals of trees. (Picture: M. Volf)

Leipzig/Jena. Trees emit scents when attacked by caterpillars and other herbivores. They use these to attract predatory insects and even birds, thus getting rid of their pests. This had only been demonstrated in smaller-scale experiments so far. A team of researchers led by the German Centre for Integrative Biodiversity Research (iDiv), the Friedrich Schiller University Jena and Leipzig University has now demonstrated this phenomenon for the first time in a natural habitat – in the 40-metre-high canopy of the Leipzig floodplain forest. The chemical calls for help are so effective that they significantly determine the composition of the insect community in the canopy. This knowledge could be used for future natural pest control in agriculture and forestry, the researchers write in the journal Ecology Letters.

Yes, trees can talk too. Not acoustically like us, but via scents. Like a human fingerprint, each tree species emits its very own bouquet of volatile organic compounds (VOC). Animals have learned to ‘read’ this pattern over the course of evolution; leaf-eating insects find their host trees this way. But the trees are not completely at their mercy; they actively defend themselves. For example, they produce bitter substances which herbivores do not like, and they also release particular VOCs to put different parts of the plant on the alert. In this way, however, the trees also attract other animals such as birds and predatory insects, which have also learned to interpret the VOC’s meaning. These then come flying to eat the tree’s pests. From the trees' perspective, evolution has provided them with a kind of "cry for help".

“The fact that plants can chemically attract parasitic wasps, predatory bugs and even birds when attacked by pests had been known for some time,” says first author Dr Martin Volf, who led the study at iDiv, and now works at the Biology Centre of the Czech Academy of Sciences. “However, this defence mechanism had never been tested for adult trees in a realistic environment so far. This was made possible by a combination of research methods, from animal behaviour experiments at the height of 40 metres on iDiv’s Leipzig Canopy Crane in the floodplain forest to molecular analyses of plant scents through metabolomics,” says the biologist. Metabolomics is the systematic study of the unique chemical fingerprints of organisms, in this case, tree leaves.

To test the effect of induced defence on predators, the researchers chemically simulated herbivore feeding on leaves by spraying branches in the crowns of adult oaks with methyl jasmonate, which is a plant hormone involved in triggering plant defences. They also placed plastic caterpillar dummies on these leaves. They regularly documented the bite and peck marks by birds and other predators. In addition, the researchers recorded the abundance of real caterpillars. In the laboratory, they offered leaves from induced and non-induced branches to moth caterpillars.

Chemical defence is a major driver of insect species composition

The researchers found that predators such as birds, parasitoid wasps and predatory bugs visited branches that were experimentally induced more often than untreated ones. The number of oak caterpillars was also significantly lower there. In the feeding test, the caterpillars of the gipsy moth (Lymantria dispar) avoided induced leaves, indicating that the trees produced repellent substances such as tannins, which the researchers had identified in the molecular analyses. The induced chemical defence turned out to be the most critical control mechanism of the species composition of insects in tree canopies.

Combination of diverse research methods thanks to iDiv research infrastructure

“The results reveal the different dimensions in which biodiversity operates: for example, the diversity of chemical defences of trees and the diversity of insectivores that depend on them are interdependent,” says Martin Volf. Senior author, Prof Nicole van Dam, head of the Molecular Interaction Ecology research group at iDiv and the University of Jena, says: “These findings can help us find alternative, natural strategies for pest control in agriculture and forestry and thus implement the plan to save pesticides.” And she adds: “The study is also an excellent example of successful integrative biodiversity research, as it brings together very different dimensions of diversity, chemical and ecological, enabled by modern infrastructure.”