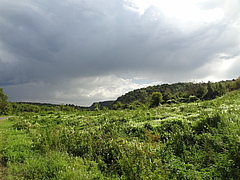 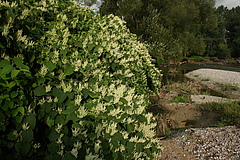 The Asian knotweed (Fallopia japonica) along a river in Austria. (Picture: Franz Essl) 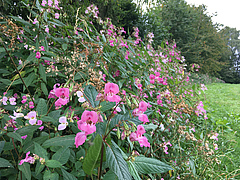 Plant communities around the world are becoming increasingly similar

Based on a press release by the University of Konstanz

Konstanz/Leipzig. Plant communities all over the planet are becoming more and more alike, even between regions far removed from each other. The reason is the dispersal of non-native plant species, according to the result of a global research project led by biologists from Konstanz and with the participation of the German Centre for Integrative Biodiversity Research (iDiv). The results of the study, which were published in the journal Nature Communications, highlight the importance of effective protective measures in order to maintain regional uniqueness.

If non-native plants can successfully disperse in an existing ecosystem, this often leads to increasing similarity among regional plant communities. On a global scale, this results in a loss of regional uniqueness. In particular, the so-called super-invader plants, with their global distribution, ensure that even regions that are far away from one another, with clear geographical separation are becoming more and more alike. The same plants are found in many areas, and with increasing frequency. This is the conclusion of an international research team led by biologists from Konstanz.

Investigation with the help of a global database

In their current study, for the first time, the researchers used global databases to examine the composition of regional floras from almost all parts of the world. They also investigated the influence of biogeographical and man-made factors on the advancing homogenisation of regional plant communities, the so-called "flora". In order to evaluate the uniqueness of individual regions, both the number of plant species shared, or not shared with other regions, as well as the degree of relationship between the plant species were taken into account. The regional evolutionary histories of these plant species were thereby also included.

Co-author Dr Marten Winter, head of sDiv (Synthesis Centre of iDiv), is one of the founders of the ‘GloNAF - Global Naturalized Alien Flora’ database, which provided the information on the naturalised non-native plant species for this study. He and the GloNAF team have been contributing to the expansion of this important source of information for the past ten years. ”First and foremost, GloNaf allows a range of data sources to be brought together and integrated with one another, making it possible for us to identify global patterns that were previously recognisable only in individual regional studies,” says Winter. ”In the next step, we’ll combine the data from this study with further even more detailed information on the spatial distribution and abundance of plants. This will enable us to better understand the dispersal dynamics of non-native species.”

Various biogeographical factors play an important role in the dispersal of non-native plants and the loss of uniqueness in regional flora. According to the study, these include the geographical distance between the observed regions and their "climatic distance" from one another. “The more climatically similar two regions are, the easier it is for a plant from one region to establish itself as a naturalised species in the other, once geographical obstacles have been overcome. Plants from a region with a short climatic distance to the new habitat are, so to speak, 'climatically pre-matched'”, explains first author of the study, Dr Qiang Yang from the University of Konstanz.

However, man-made factors also influence the dispersal of non-native plants and the homogenisation of global regional flora. As the researchers illustrate, the general administrative history of some of the areas studied also plays a role; regions that are, or were under the same political administrations have become floristically more similar.

Current examples include regions that are part of the same national territory, like various regions within the United States. By contrast, historical examples are the European colonial powers and their former colonies. “Between regions of the same territory and those with historical colonial connections, there was, or still is an active exchange in the form of cargo and passenger transport. This usually increases the exchange of plants across geographical boundaries - be it deliberately, as a commodity or crop, or unintentionally,” explains Qiang Yang.

To sum up, non-native plants, if naturalised, drive the global homogenisation of regional plant communities, and humans make a significant contribution to this through the spread of these non-native plants. “These effects can be seen today even in the most remote areas of the world,“ reports Prof Dr Mark van Kleunen, Professor of Ecology in the Department of Biology at the University of Konstanz and senior author of the article. He concludes: “If in the future, there are no effective protective measures against the advancing dispersal and naturalisation of non-native plants, these will increasingly destroy the uniqueness of our habitats - and make the world a monotonous place.“