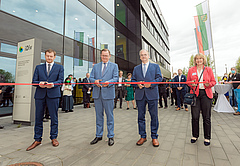 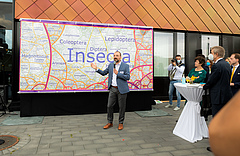 iDiv speaker Prof Dr Christian Wirth uses the "Taxa Map" to explain how our life depends on the multitude of living species on the planet. (Picture: Swen Reichhold/iDiv) 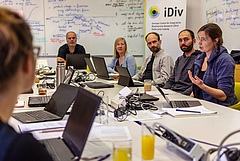 At iDiv, researchers from a wide range of disciplines from Central Germany and all over the world pool their knowledge. (Picture: Swen Reichhold/iDiv)

Leipzig. Michael Kretschmer, Bodo Ramelow and Dr Reiner Haseloff – the Ministers President of Saxony, Thuringia and Saxony-Anhalt respectively – together with DFG Secretary General Heide Ahrens, officially opened the new research building of the German Centre for Integrative Biodiversity Research (iDiv) on Wednesday. The event, which took place under strict hygiene measures, was attended by more than 100 guests. They learned about the contribution iDiv is making to solving the global biodiversity crises and intends to make in the future. German Chancellor Dr Angela Merkel sent a message congratulating the iDiv team. The new building at Leipzig’s Alte Messe has been designed as a place for scientists from all over the world to share ideas and conduct integrative research. From 2024 onwards, the three federal states involved intend to take over the financing of the research centre together with other sponsors.