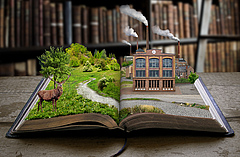 Biodiversity has been steadily declining not only in reality but also in western literature since industralisation. (Picture: Gabriele Rada / iDiv)

Leipzig/Frankfurt a.M. Biodiversity has been steadily declining in western literature since the 1830s. This is the finding of a comprehensive, interdisciplinary study led by Leipzig researchers, who examined almost 16,000 works of Western fiction from between 1705 and 1969. The study has been published in the journal People and Nature. The researchers interpret the results as an indication of humanity’s increasing estrangement from nature.

The planet's biodiversity is declining. In its latest report, the World Biodiversity Council (IPBES) states that at least 680 species of vertebrates have been exterminated as a result of human activity since 1500. The rate of species extinction is increasing. An international team led by Leipzig researchers wanted to find out whether the biodiversity crisis in the real world is also reflected in the conceptual world.

In order to do this, they investigated how distributions of biodiversity in literature have changed over the past 300 years. They used the literature collection of the Project Gutenberg for their work. With almost 60,000 works, it is the largest digital, publicly accessible collection of, primarily, English versions of Western works of fiction. Literature from the period 1705 to 1969 was selected from part of this collection, and 16,000 works by 4,000 authors, including Johann Wolfgang von Goethe, Edith Nesbit and Victor Hugo were then chosen. The texts were first searched for the common names of all kinds of living things from a list of 240,000 words such as horse, cockchafer and lavender. All texts by these authors were then checked for word occurrence, frequency and distribution.

This large-scale study is unique

“This unusual project was only possible through the integration of literature, life science and computer science”, states first author Lars Langer from Leipzig University. “Such a large-scale study of literary communication on the subject of biodiversity is, to date, unique. By applying new computer-assisted analytical methods, we were able to systematically examine and evaluate the content of biological terms contained in within the literature.”

In their analysis, the researchers from Leipzig University (UL), Goethe University Frankfurt, the German Centre for Integrative Biodiversity Research (iDiv), the Senckenberg Biodiversity and Climate Research Institute (SBiK-F) and the Helmholtz Centre for Environmental Research (UFZ) saw a hump-shaped trend in the frequency, density and variety of labels for animals and plants in literature, increasing until the middle of the 19th century, but then decreasing steadily. After 1835, there was a tendency to use less specific terms, for example, the word tree was used rather than a more specific term such as oak. Not only did the use of synonyms such as paddock for toad decline, but also the common knowledge of the origin of such terms. However, living things with which humans have constant or frequent contact continued to be mentioned often; examples include domesticated animals like horse and dog and potential threats like bear and lion.

The researchers interpret the initial, apparent increase in biodiversity found in the literature as a result of the discovery and colonisation of a large part of the world by European civilisations. In the wake of these developments, new terms appeared; parrot, banana and panther are examples of this. Improvements in research and education during the Age of Enlightenment could have contributed to a further increase. The first indications of an increasing awareness of incipient biodiversity loss may have coincided with Romanticism. With industrialisation, urbanisation and the associated changes in land use, not only does the real loss of biodiversity begin, but possibly also the deprivation of nature-related thinking patterns.

“The real biodiversity crisis seems to be closely linked to a conceptual crisis,” says Prof Christian Wirth, senior author of the study and researcher at UL, iDiv and Max Planck Institute for Biogeochemistry Fellow, assessing the results of the investigation. “We see that, starting with the dawn of industrialisation, both crises run in parallel, and we assume they are interrelated and mutually reinforcing. I think that we can only halt the loss of biodiversity by means of a radical change in awareness. Our methods can detect whether policy programmes, crises or positive examples make biodiversity more relevant to us and present in our thoughts. Today, in addition to books, social media could also be very enlightening.” “There is also the potential for transference to other cultures, cultural assets and time periods. A future investigation of current media would also enable current analyses and derived forecasts about the relationship between humans and nature,” adds Langer.