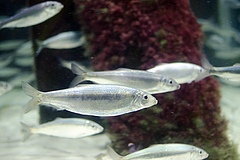 The autumn spawning herring collapsed towards the end of the 16th century as a result of a combination of overfishing and climate change. (Picture: Aquarium GEOMAR, Jan Steffen) 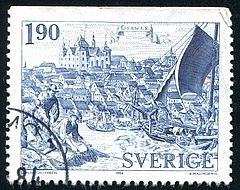 Historical scene on a Swedish postal stamp. The catch potential of the fishing fleets in the early modern era was hardly inferior to that of today's fisheries. (Picture: rook76 – stock.adobe.com)

Kiel/Leipzig. The collapse of the important herring fishery in the western Baltic Sea towards the end of the 16th century was the result of a combination of overfishing and climate change. The researchers see similarities in the current development of German fish stocks. A team of fisheries economists, historians and biologists from Kiel University (CAU), the German Centre for Integrative Biodiversity Research (iDiv) and Leipzig University has reconstructed herring catch levels in the Baltic Sea between 1200 and 1650. The by far most important fishery for autumn spawning herring at that time collapsed within a very short period, without recovering until today. The study, for which they evaluated historical sources, was published in the journal Hansische Geschichtsblätter.

More than a third of the world's commercial fish stocks are considered overexploited or threatened by overfishing. Just this summer, scientists from the University of Hamburg, the Kiel University and the iDiv research centre reported that stocks of cod, one of the most widely consumed edible fish in Germany, have reached a tipping point in the western Baltic Sea, which if exceeded, will probably be irreversible. In the case of cod, climate change has been proven to play a decisive role, with rising temperatures, the cod's capacity to reproduce decreases. Stocks of herring in the western Baltic Sea have also become so depleted that, according to experts, continuing to fish there is neither lucrative nor sustainable.

In a new study, the researchers show - based on historical sources such as toll-books of the Hanseatic City of Lübeck - that a similar interaction between negative environmental effects and overfishing have decimated herring stocks in the western Baltic Sea as far back as the Middle Ages. A cold period in the mid-16th century lowered the average temperature by 0.85°C. As a result, the herring stock lost its productivity, as juvenile fish did not survive. The autumn-spawning herring, until that time the dominant herring subspecies in the western Baltic, almost completely disappeared – and along with it, herring fishing in the region.

Contrary to the widespread assumption that it was industrialisation, which made overfishing possible at all, the new study shows that fishing in the Baltic Sea was not sustainable even in the pre-industrial age. The catch potential of fishing fleets in early modern times was not appreciably inferior to those of today. For example, archaeological finds suggest that the medieval settlement of Falsterbo, a town in southern Sweden alone could have been home to around 45,000 fishermen.

For their study, the scientists had to use historical sources, which gave them indirect indications of fish stocks from 1200 to 1650. They analysed medieval literature to collect pertinent additional data, such as the production of salt used to preserve salted herring. With the aid of this information, they were able to draw conclusions about the catch levels at that time. “The collaboration across very different disciplines, in our case biology, economics, climate research, sociology and of course history, was a unique experience for me, and one with a fascinating result. This is real interdisciplinary research such as I have never seen before”, said an enthusiastic Oliver Lehmann, the lead historian behind the study.

After its population collapse, the autumn-spawning herring was replaced by a different, spring-spawning herring subspecies. It is this fish that, to this day, primarily constitutes catches in the Baltic Sea. “Basically, our historical data on autumn-spawning herring shows a similar pattern we find in cod today and, more recently, for spring-spawning herring in the western Baltic Sea, too,” explained co-author Dr Rüdiger Voss, fisheries economist at Kiel University and iDiv, Leipzig University. “Overfishing meets climate change and puts an end to the fish population and the fishing associated with it. Analogous to cod stocks today, a tipping point seems to have been exceeded - unfortunately towards an unintentionally stable state of lower herring productivity.”

The study was carried out within the framework of the marEEshift project, “Marine ecological-economic systems in the Western Baltic Sea and beyond: Shifting the baseline to a regime of sustainability”, funded by the Federal Ministry of Education and Research and coordinated at iDiv. In cooperation with the participants, institutions, measures and processes, which could promote an ecologically and economically sustainable system for the use of marine resources, are to be identified and initiated. “This could mean a regime change from the current situation of exploitation to a new, resilient sustainable development regime,” added Voss, who works in the field of food security at the Center for Ocean and Society, a platform of the priority research area Kiel Marine Science at Kiel University.

If the spring-spawning herring continues to be heavily exploited under current conditions, it could face a similar fate to that of its relative. “In times of warming climates, it will be important to know not only about tipping points and the ecological preferences of the fish species caught but also to take them into account,” says fisheries biologist and co-author Dr Jörn Schmidt from Kiel University. “The aim must be to have an ecosystem-based fisheries management structure that takes environmental changes into account. The clock is ticking for management adjustments. We shouldn't waste any time.”
Sebastian Tilch and Bernardo Arroyo Garcia