Where the wild bears are 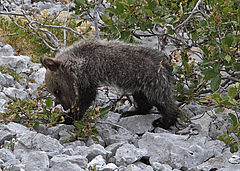 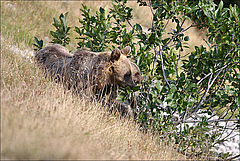 Recording the bears' patterns of movement is especially important for their own protection, but also for that of the people living there and the sensitive flora. (Picture: Francesco Culicelli / Photo archive of Salviamo l'Orso (https://www.salviamolorso.it)) 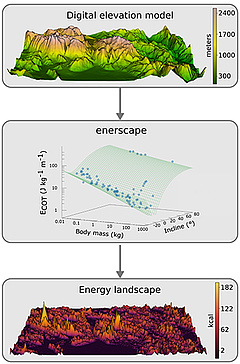 The energy an animal needs to expend to travel a certain distance is calculated, based on the weight of that animal and its general movement behaviour. This energy expenditure is then integrated with the topographical information of an area. (Picture: Methods in Ecology & Evolution)

Leipzig/Jena/Oxford. New software helps determine the movements of large wild animals thereby minimising conflicts with people. The software is simpler than measurements obtained using radio transmitters and can be used where conventional methods fail. An international team led by the German Centre for Integrative Biodiversity Research (iDiv), the Friedrich Schiller University Jena, Aarhus University and the University of Oxford has published a description of the new software in the journal Methods in Ecology and Evolution.

Large land animals have a significant impact on the ecology and biodiversity of the areas they inhabit and traverse. If, for example, the routes and stopping places of cattle, horses, sheep, and also those of wolves or bears overlap with those of people, this often leads to conflicts. Knowing and being able to predict the movement patterns of animals is, therefore, of utmost relevance. This is not only necessary for nature and landscape protection, and to safeguard agriculture and forestry, but also for the safety of human travellers and the security of human infrastructures.

The Abruzzo region of Italy, the location of the Sirente Velino Regional Park, is home to the endangered and therefore protected Marsican brown bear (Ursus arctos marsicanus). Recording the bears' patterns of movement in the 50,000 hectare, partly populated area is especially important for their own protection, but also for that of the people living there and the sensitive flora. Movement pattern maps can be used to determine the bears’ roaming routes and places of refuge more effectively. These can then be adequately protected and, if necessary, adjusted.

Traditional maps of animal movements are mostly based on long-term surveys of so-called telemetry data; this comes from individuals fitted with radio transmitters. This type of map-making is often time consuming and expensive, and lack of radio contact in some areas means that no data can be collected at all. That was also the case in the vast and isolated Sirente Velino national park.

Researchers from iDiv, the Friedrich Schiller University Jena, Aarhus University and the University of Oxford have developed software ­– named ‘enerscape’ – with which maps can be created easily and cost-effectively. Dr Emilio Berti is post-doctoral researcher with the Theory in Biodiversity Science research group at iDiv and Friedrich Schiller University Jena. As first author of the study he stressed: “What’s special is that the software requires very little data as a basis.” The energy an animal needs to expend to travel a certain distance is calculated, based on the weight of that animal and its general movement behaviour. This energy expenditure is then integrated with the topographical information of an area. “From this information we can then create ‘energy landscape maps’ for individuals as well as for groups of animals. Our maps are calculated rather than measured and thus represent a cost-effective alternative to traditional maps. In particular applications, such as the conditions in the Italian national park, our method makes the creation of movement pattern maps actually possible at all,” said Berti.

Software helps with the designation of protection zones

Using enerscape, the researchers found that bears choose paths that require less energy expenditure. These paths often lead through settlements, so that the bears encounter humans – which frequently ends fatally for the animals. The software also predicts, that bears wanting to save energy will tend to stay in valleys, far away from human settlements. Bear conflict as well as protection zones can now be identified using enerscape. Its maps can also be used to check whether landscape elements are still well-connected enough to enable the animals to move around the area sufficiently.

enerscape is freely available and adaptable

The researchers' software enerscape is based on the widely used and openly accessible programming language ‘R’. It has a modular structure and can therefore process animal movement and topographical data from a wide variety of ecosystem types. “This makes it possible for both researchers and wildlife managers to adapt the software to a wide variety of landscapes and animals,” said Prof Fritz Vollrath from the Zoology Department of the University of Oxford and senior author of the study, emphasising the special nature of enerscape. “This means that the number of maps of animal movement in landscapes will increase in just a short time. With significantly more cartographical data, the understanding of the behavioural ecology of a species in a certain habitat will also fundamentally change. This will primarily benefit nature conservation and, in particular, rewilding measures – the reintroduction of wild animals,” said Vollrath.