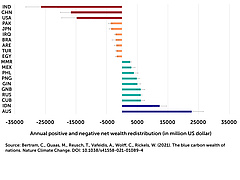 Countries like Australia and Indonesia with their large coastlines contribute a great deal to global CO2 storage and thus also to mitigating the costs of climate damage. Economically, however, they hardly benefit from this. The main beneficiaries here are India, China and the USA. (Picture: Bwe)

Climate and ecosystem change lead to a global redistribution of wealth

Kiel/Leipzig. Coastal ecosystems such as seagrass meadows, salt marshes and mangrove forests are valuable to humans in many ways. In particular, they store carbon - and do so with a much higher surface density than forests, for example. They thus make an important contribution to mitigating climate change. Australia's coastal ecosystems alone, which absorb a particularly large amount of CO2 from the atmosphere, save the rest of the world climate-related costs of around 23 billion US dollar a year. This is according to calculations just published in Nature Climate Change by researchers at the Kiel Institute for the World Economy (IfW Kiel), GEOMAR Helmholtz-Centre for Ocean Research Kiel, the Universities of Kiel and Leipzig (UL) and the German Centre for Integrative Biodiversity Research (iDiv).

According to the study, Australia, Indonesia and the USA provide the largest carbon storage potential with their coastal ecosystems. The team also calculated which countries benefit most from the coastal CO2 uptake worldwide. The different ways in which countries are affected by climate change are quantified by using the so-called social costs of carbon.

“If we take into account the differences in marginal climate damages that occur in each country, we find that Australia and Indonesia are clearly the largest donors in terms of globally avoided climate damages originating from coastal CO2 uptake, as they themselves derive comparatively little benefit from the high storage potential of their coasts,” says Dr Wilfried Rickels, who heads the Global Commons and Climate Policy Research Center at the Kiel Institute. “The U.S., on the other hand, also store a lot of carbon in their coastal ecosystems, but at the same time benefit the most from natural sinks behind India and China. In monetary terms, the three countries realize annual welfare gains of about 26.4 billion US dollars (India), 16.6 billion US dollars (China) and 14.7 billion US dollars (U.S.) thanks to global coastal ecosystems and the resulting lower climate impact costs.”

The basis for the monetary calculations is the so-called social cost of carbon, which allow assessing the contribution of coastal carbon uptake in the “inclusive wealth” concept. ‘Inclusive wealth’ is defined as the totality of all-natural and man-made capital stocks, valued with so-called shadow prices, i.e. the contributions to social welfare. Among other factors, the absolute scarcity of resources plays an important role in shadow prices. Atmospheric CO2 has a negative impact on welfare primarily through climate change. However, countries are differently affected by climate change and accordingly country-specific shadow prices are used in the study.

The analysis does not include other carbon sinks or emissions from energy and industry. When carbon emissions from energy and industry are also considered, only Guinea-Bissau, Belize, Vanuatu, Sierra Leone, Solomon Islands, Guinea, Comoros, Samoa, Madagascar, and Papua New Guinea make a net positive contribution through their coastal ecosystems since they store more CO2 in coastal ecosystems than they emit in total.

The study also emphasizes that carbon storage is only a small part of the positive impacts of coastal ecosystems for humans. “Coastal ecosystems are an essential component of marine ecosystems and are therefore particularly important for marine biodiversity and for fisheries. At the same time, they contribute to flood and coastal protection and are therefore important for adaptation to climate change,” emphasizes Prof Martin Quaas, who heads the Biodiversity Economics research group at iDiv and UL.

In any case, there is currently still a very strong focus on afforestation on land when it comes to the challenges of achieving the Paris climate goals. “Marine CO2 uptake, as well as its enhancement, requires more attention in the debate on net-zero greenhouse gas emissions and net-negative CO2 emissions targets,” Rickels points out. Especially a possible weakening of the marine carbon sinks would require even more significant mitigation and carbon dioxide removal efforts. “The coasts, with their numerous different user groups as well as possible conflicts of use, have a special role to play here.”

The natural capital approach used in the study is suitable for assessing the redistribution resulting from CO2 emissions and CO2 sinks, which, unlike existing market-based assessments, is not influenced by the stringency of the underlying climate policy. The researchers plan to explore this question in further studies.