Into the third funding phase with a boost for growth 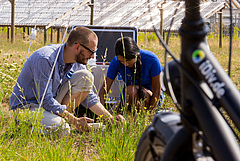 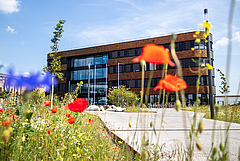 Since October 2020, iDiv researchers have worked in a new building at the Alte Messe in Leipzig. (Picture: Stefan Bernhardt, iDiv) 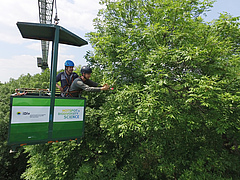 Scientists use the Leipzig Canopy Crane to investigate the hidden habitat in the treetops. (Picture: Steffen Schellhorn) 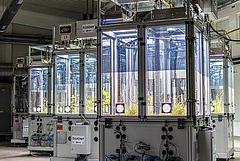 In the iDiv Ecotron, researchers manipulate biodiversity and study the consequences for many ecosystem functions. (Picture: Stefan Bernhardt, iDiv)

Bonn. The German Centre for Integrative Biodiversity Research (iDiv) Halle-Jena-Leipzig has succeeded in its application for further funding from the German Research Foundation (DFG). On Tuesday, the Joint Committee of the DFG approved support for iDiv in the third funding phase with around 11.5 million euros annually. This represents an increase of 26 percent over the second funding phase. Even after DFG funding ends, probably in 2024, backing for iDiv as a multipolar university centre for biodiversity research with Central German roots and global purview is to be continued by its host institutions and federal states, along with the support of other funders such as the state of Germany.

The German Centre for Integrative Biodiversity Research (iDiv) Halle-Jena-Leipzig has been researching global biodiversity change since its establishment in 2012. Close to 300 people now work at the DFG research centre, many in the new building at the Alte Messe in Leipzig, completed in 2020. In addition, the more than 100 member groups of this scientific network conduct research at locations and facilities in Halle, Jena and Leipzig.

According to the most recent report by the Intergovernmental Science-Policy Platform on Biodiversity and Ecosystem Services (IPBES), up to one million species are threatened with extinction. iDiv aims to assess this global crisis, research its consequences and show ways in which we can sustainably manage biodiversity. The tools of the biodiversity researchers range from satellites to smartphone apps, and from DNA sequencers and high-performance computers to construction cranes. In just the nine-year period since iDiv was founded, research platforms such as the Leipzig Canopy Crane, the iDiv Ecotron, and virtual data platforms have also been set up and networked with one another, mainly in Central Germany. This distinctive infrastructure supports the uniqueness of the centre: the integration of various disciplines and expertise to answer urgent societal questions. The research centre has, at the same time, earned an outstanding international reputation. This prominence is based on, among other things, sDiv; the iDiv Synthesis Centre for Biodiversity Sciences. So far, over 1000 scientists from 60 countries have travelled to Leipzig for a wide range of projects in order to answer scientific questions in new ways. Also contributing to the reputation of the research centre is its graduate school, with almost 80 doctoral researchers. This will be expanded to include a programme for postdoctoral researchers in the new funding phase. In March, international reviewers, on behalf of the DFG, recognised the high quality of iDiv’s work and made a recommendation for further funding. This was acknowledged by the DFG Joint Committee, with iDiv’s requested funding amount subsequently being made available without any reduction. With this, the DFG research centre is able to take advantage of a further boost in growth and moves with increased strength into the crucial third funding phase. Basic funding from the DFG will end in 2024 and a new funding model will come into operation. The Ministers of Science of the states of Saxony-Anhalt, Thuringia and Saxony have already set the course for this with the policy statement they signed in July 2019.

The institutions contributing as partners to the German Centre for Integrative Biodiversity Research (iDiv) are and will remain Leipzig University, Martin Luther University Halle-Wittenberg, the Friedrich Schiller University Jena, in cooperation with the Helmholtz Centre for Environmental Research (UFZ). In addition, several Leibniz and Max Planck Institutes are involved as cooperation partners.

Everyone involved in iDiv was delighted with the DFG’s decision. Here are a few of the reactions:

Prof Dr Christian Wirth (iDiv Speaker, Research group head at Leipzig University, Fellow of the Max Planck Institute for Biogeochemistry)
“The DFG’s decision is an overwhelming vote of confidence. We’ll use the funds to further intensify our efforts. Our planet is becoming increasingly depleted, and species are irretrievably lost day after day, so we’re working under time pressure on strategies that will enable us to protect and sustainably manage biodiversity. We’re grateful that we have the full support of the DFG and that of our partners in the three Central German states for this important task.”

Prof Dr Tiffany M Knight (iDiv Speaker, Research group head at the Martin Luther University Halle-Wittenberg and at the Helmholtz Centre for Environmental Research (UFZ))
“The feedback we received from the reviewers acknowledges our efforts during the past years. We have created an environment where researchers with different expertise can interact and inspire each other. I enjoy not only having a great consortium of colleagues from the region, but also the ability to synthesize biodiversity knowledge with colleagues from all around the world. I am grateful that the DFG enables us to continue our work in the years to come.”

Prof Dr Walter Rosenthal (Chair of the iDiv Board of Trustees, President of the Friedrich Schiller University Jena)
“The German Centre for Integrative Biodiversity Research (iDiv) has turned Halle, Jena and Leipzig into shining spots on the map of research into globally crucial issues of the future. The three universities, the Helmholtz Centre for Environmental Research (UFZ) and other non-university partners are combining their expertise with great commitment in order to understand biodiversity in all its facets and thus combat the dramatic loss of biodiversity. An international panel of experts has once again confirmed the network’s internationally highly recognised cutting-edge research, which is the basis of the funding. The universities of Halle, Jena and Leipzig and the UFZ, which form the core of iDiv, have already decided, like the federal states, to ensure the continuation of the national centre of excellence for biodiversity after the end of the DFG funding beyond 2024.”

Prof Dr Armin Willingmann (Minister for Economic Affairs, Science and Digitalisation for the state of Saxony-Anhalt)
“Continued funding by the DFG is proof of the high quality of research at iDiv. The centre also has a strong impact on its participating universities and partner institutions. An interdisciplinary network for biodiversity research has grown at the University of Halle, and a corresponding master's programme will start there from the winter semester of 2021. Biodiversity research is increasingly becoming a scientific discipline in its own right. This is linked to an important message: Anyone who wants to solve Earth's environmental problems can do more than demonstrate 'for future' on Fridays; they can also study in Halle, Jena or Leipzig with world-leading scientists to help shape our future. To make this offer even more attractive, the state of Saxony-Anhalt is supporting the corresponding focus and profile development at the University of Halle during the third funding period with an additional total of four million euros.”

Wolfgang Tiefensee (Thuringian State Minister of Economy, Science and Digital Society)
“Even in the midst of the pandemic, we must not forget that there are other major challenges that we also have to address with intensive research. Species extinction is one such challenge. We are very proud that the cross-state research centre iDiv has developed so well and that, after a rigorous review, the DFG is also providing funding for a third period. Thuringia is committed to securing the structures which have been established for after this final DFG funding period ends. The Thuringian share for this has already been included in the state budget.”

Sebastian Gemkow (Saxon State Minister of Science, Culture and Tourism)
“The global change in biodiversity presents huge challenges to society, not only regionally but also worldwide. Since 2012, iDiv has developed into an internationally visible beacon of biodiversity research, whose scientists are working on solutions to these urgent problems. As the reviewers also highlighted as exemplary, I see iDiv’s success as confirmation that important contributions to the existential issue of achieving biodiversity can be made with successful prioritisation of focus, a strong consortium – of the three universities and non-university partners – and intelligent research policy interaction. The state of Saxony has invested a lot of money in the construction of the new research building and the research greenhouse at iDiv’s central location in Leipzig. The clear vote of the reviewers and today’s decision by the DFG to continue funding iDiv for a final phase as a DFG research centre, which I’m very happy about, are both confirmation and motivation for us to ensure iDiv’s permanency and to support its development.”