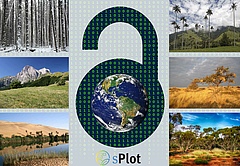 sPlotOpen contains vegetation data from 114 countries of all climate zones

Halle/Amiens. It's a treasure trove of data: the global geodatabase of vegetation plots “sPlotOpen” is now freely accessible. It contains data on vegetation from 114 countries and from all climate zones on Earth. The database was compiled by an international team of researchers led by Martin Luther University Halle-Wittenberg (MLU), the German Centre for Integrative Biodiversity Research (iDiv) and the French National Centre for Scientific Research (CNRS). Researchers around the world finally have a balanced, representative dataset of the Earth's vegetation at their disposal, as the team reports in the journal Global Ecology & Biogeography.

Global issues and questions require global answers. “If we want to understand or predict how climate change will affect biodiversity in all regions on Earth, we have to consider them in their entirety. We need more than just data from a few well-studied regions,” explains Professor Helge Bruelheide, a geobotanist at MLU and a member of iDiv. Instead, a global geodatabase is required with information on vegetation from all continents and climate zones.

Now, with the launch of “sPlotOpen”, this database not only exists but can be accessed by anyone who is interested. Around 100,000 vegetation plots from 114 countries have been entered into the database which has been released as open access. Each data point contains information on all of the plant species co-occurring at that location, alongside geographical, temporal and methodological metadata. This enables researchers to see exactly when, where and by whom the data point was collected.

Most importantly, sPlotOpen provides information about the complete plant community that can be found at the respective location. This is one of the great advantages of the new database, explains Dr Francesco Maria Sabatini from MLU and iDiv, who is coordinating the project together with Dr Jonathan Lenoir from the CNRS. “There are already several databases that show the distribution of individual plant species worldwide. In reality, however, plant species rarely occur alone and in isolation,” says the researcher. With the aid of sPlotOpen, scientists could figure out whether the data was collected from a forest - with various tree and grass species - or a meadow. According to the biologist, this is important when selecting individual surveys for specific research projects that are meant to investigate, for instance, only forests or grasslands.

Another advantage is that the team has attempted to balance the data. "There is already an incredible wealth of data on vegetation in Europe, North America and Australia. But, for many different reasons, there is much less data on other regions," says Sabatini. If the data from all countries were compared without weighting it first, false conclusions could be drawn. Therefore, the team tried to establish certain comparability between the datasets from different regions. For example, not all data from Western Europe was included in the project - only a representative selection. The team already balanced the data for the benefit of future users. This should prevent a striking imbalance of data over regions that are less well documented, for example, warm or cold, dry or humid climates.

“Our database has the potential to be a gamechanger for research projects in the field of macroecology and beyond,” explains Sabatini. It could also be used in the field of geoscience, for example, to train algorithms for analysing satellite images. If you know where a certain community of plants exists, you can associate this plant community to a specific pattern in satellite images, namely a specific spectral community, and search other images for the same patterns.

In order to create this unique set of data, the team from Germany and France have relied on the support of 161 researchers from 57 countries who participated in the project by providing data. “Behind these individual datasets are countless colleagues and students, who went to the field collecting data in the first place. The sPlotOpen database could not exist without them,” says Sabatini. The data also comes from national projects, such as the German Vegetation Reference Database, which is managed at MLU by Helge Bruelheide’s research group.

This research was financed inter alia by the Deutsche Forschungsgemeinschaft (DFG; FZT-118). It is a product of the sDiv working group sPlot. iDiv’s synthesis centre sDiv supports working group meetings where international scientists work together on scientific issues.