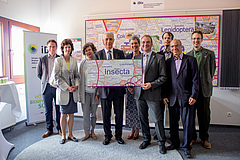 As a present, Mr Tillich was given a miniature version of the 'taxamap', a picture representing all known genera on earth (photo: Stefan Bernhardt). 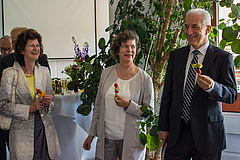 The Minister of State Dr Eva-Maria Stange, the Rector of the Leipzig University Prof Beate Schücking, and the Minister-President enjoy a 'biodiversity snack' (photo: Stefan Bernhardt). 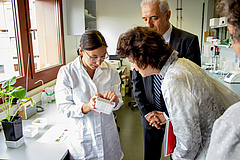 During the lab tour: doctoral student Rebekka Sontowski explains how plants fight back when they are attacked by herbivores (photo: Stefan Bernhardt). 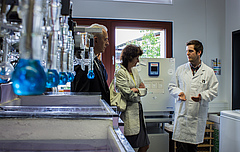 Doctoral student Felix Gottschall talks about the importance of earthworms for carbon storage in the soil (photo: Stefan Bernhardt). 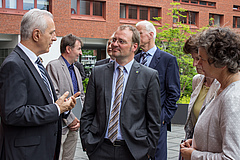 Leipzig. During his visit to the Leipzig University on Friday, the Minister-President of the German Federal State of Saxony, Stanislaw Tillich, got an insight into the work at iDiv, the German Centre for Integrative Biodiversity Research Halle-Jena-Leipzig. He was welcomed by the Rector of the Leipzig University, Prof Dr Beate Schücking, as well as by iDiv's Managing Director, Prof Dr Christian Wirth, and then was presented ongoing research projects.

Scientists at the iDiv research centre opted for an unconventional way to demonstrate to the Minister-President how much abundance and natural wealth the diversity of life provides on Earth  – with a 1.5-by-3-metre screen illustrating the relationships of all known genera of animals, plants, fungi and bacteria. However, Prof Christian Wirth stressed, with respect to individual species, we are currently aware of only approximately ten percent of all living things that exist on Earth. Then he moved a blind across the screen, which covered a large part of the biodiversity map. While research is only now being done into which immense services biodiversity also provides for us humans (as an example, Wirth pointed out the pollination of our food crops), due to current human activity, species on Earth are becoming extinct a hundred times as quickly as would naturally be the case. Therefore, the researchers at iDiv aim to provide the scientific basis for the sustainable management of biodiversity on our planet.

Tour of the laboratories: Root flies and underground terrarium

The subsequent laboratory tour enabled Tillich to gain an idea of the internationally acclaimed research. In one of the laboratories, he was shown the state-of-the-art equipment for sophisticated chemical analytical procedures with which scientists explore, for example, how cabbage plants prevent themselves from being eaten by root flies. In another laboratory Tillich examined what are known as ‘planar cosms’, types of underground terrariums which are used for researching the interactions between earthworms and plants. He said: ‘The iDiv research centre demonstrates the huge potential of outstanding research and productive networking. This is how the Leipzig University, as one of the oldest German-speaking universities, is impressively continuing its over 600-year-long history of scientific work. Its 14 faculties and many renowned professors have turned the university into a magnet for young people, many of whom move to Saxony. More than 28,000 students leave their mark on the city and play a role in establishing Leipzig’s immense appeal.’

The funding of the iDiv research centre was confirmed last year by the German Research Foundation (DFG). The volume of funding has increased, compared with the first period, by 32 percent and is now over 36.5 million euros over a period of four years. iDiv is operated by the Martin Luther University Halle-Wittenberg, the Friedrich Schiller University Jena and the Leipzig University, and in cooperation with the Helmholtz Centre for Environmental Research (UFZ). Around 280 employees and members from over 30 nations work at the iDiv sites in Halle, Jena and Leipzig. A new iDiv building will be built near the current iDiv site at the Deutscher Platz by early 2020. The research centre is an example of the successful cooperation within the Universitätsbund Halle-Jena-Leipzig [Halle-Jena-Leipzig University Confederation].