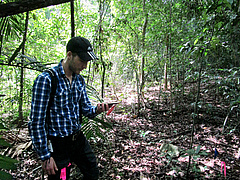 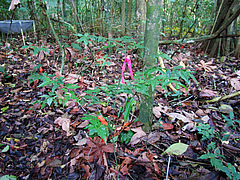 The fate of seedlings was followed for twenty years (Picture: Stefan Kupers). 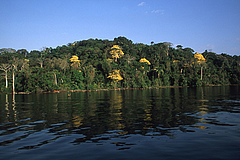 Data for the study were collected on Barro Colorado Island in Panama (Picture: Christian Ziegler). 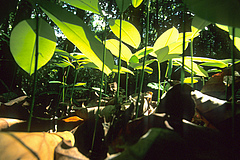 Report by Stefan Kupers, scientist at iDiv and first author of a new study in the Journal of Ecology:

Leipzig. Even in wet environments like tropical rainforests, tree species are separated along local gradients of soil moisture. We found evidence for this separation based on highly detailed soil moisture data. The reason for this separation was that some tree species grew faster at wetter locations while other species grew faster at drier locations. Our findings were recently published in the Journal of Ecology. It is important to understand how tree species respond to variation in soil moisture in order to better predict how tropical forests may respond to shifts in rainfall patterns caused by climate change. Tree species differ strongly in their water requirements: some species do best in moist habitats but do not support drought very well, and for other species it is vice versa. Therefore, in forests that are located in regions with high rainfall, different species are abundant compared to forests in comparably drier regions. This is also true for tropical rainforests, where we observe clear patterns of species distributions along regional rainfall gradients. But what if we narrow down the scale on which we observe the distribution of species – and instead of different regions, we compare two locations some dozen meters apart? Do we find that the tree species specialise with respect to soil moisture? This question is difficult to study because on such local scales, detailed soil moisture data are usually not available. Researchers have therefore been limited to studying species distributions among broad habitat classes such as moist slopes versus drier hilltops. However, soil moisture can vary strongly within habitats, for example when the soil type changes (sandy soils are usually drier than clay soils). It has therefore remained unclear how important local soil moisture gradients are for the performance and distributions of tropical tree species. Together with colleagues from Panama, we measured soil moisture in a tropical forest on Barro Colorado Island, Panama. We then linked these data to the performance of individual seedlings measured yearly for over two decades. For 62 species, we compared growth and mortality rates with their position along the soil moisture gradient. This allowed us to identify the mechanism that causes the separation of species on the moisture gradient. We found that the distribution of species was determined by differences in growth rates on the soil moisture gradient. In particular, species that grew well on the wet end of the gradient were also more abundant there. The reason for this was not only that they became taller more quickly, making them less vulnerable to die during a drought, but that they grew faster than competing species that were more abundant on the dry end of the gradient. These findings show that it is important to understand the growth responses of species to soil moisture, because it determines where species are able to survive and become abundant. This information can help understand how tree species in tropical forests may be affected by changes in rainfall that are expected in the tropics due to climate change.
Stefan KupersOriginal publication:
(iDiv scientists in bold) Kupers, S.J., Engelbrecht, B.M.J., Hernández, A., Wright S.J., Wirth C., Rüger, N. (2018) Growth responses to soil water potential indirectly shape local species distributions of tropical forest seedlings. Journal of Ecology. DOI: 10.1111/1365‐2745.13096Contact:Stefan Kupers
Doctoral researcher in the research group Computational Forest Ecology
German Centre for Integrative Biodiversity Research (iDiv)
Tel.: +49 341 9733168
Email: stefan.kupers@idiv.de
Web: https://www.idiv.de/groups_and_people/employees/details/eshow/kupers_stefan.htmlDr Tabea Turrini
Media and Communications
German Centre for Integrative Biodiversity Research (iDiv)
Tel.: +49 341 9733106
Email: tabea.turrini@idiv.de
« back to Archive 2018
Share this site on: