Bringing the “micro” to the field of macroecology 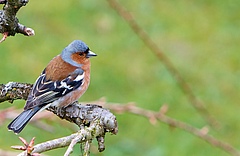 The chaffinch is a common bird species in Europe, including the Czech Republic. (Photo: pixabay)

Leipzig. How are species and individuals distributed across the earth? And what are the mechanisms that shape these distributions? The scientific field dealing with those questions is called macroecology as it focuses on large (“macro”) spatial scales. Traditionally, macroecologists have studied plants and animals that are composed of multiple cells and are thus relatively large. In a new paper published in Trends in Ecologyand Evolution with several iDiv researchers among the authors, researchers now push for applying the methods of macroecology to microorganisms, i.e. organisms that are composed of single cells, like bacteria or most fungi. Both disciplines, macroecology and microbial ecology, could benefit from bridging the gap between them, the study authors argue. When researchers divided the Czech Republic in quadrants of 10 km x 10 km and then counted the birds in each quadrant, they found the following pattern: bird species that tend to have many individuals (high abundance) within one quadrant also tend to be present in many quadrants. On the other hand, bird species that tend to be rare within one quadrant also tend to be absent from many quadrants. Replace quadrant with human belly button and birds with bacteria (every belly button is home to thousands of them) – and the pattern remains the same. In both cases, the distribution of species and individuals follows a typical abundance-occupancy relationship, independently of the size of the organisms considered and independently of their habitats. Abundance-occupancy relationships are just one of the ways that researchers in macroecology analyse data to understand patterns in diversity over space and time. And they are just one example of how an analysis typically used for larger organisms can be meaningfully applied to microorganisms, as the authors of the recent publication show. Another example are distance-decay relationships, which illustrate how the composition of different species changes from one location to another, for example between different forest fragments – be it communities of tree species or of microbes living in the soil. Senior author Prof Jonathan Chase, professor at the iDiv research centre and the Martin Luther University Halle-Wittenberg (MLU) says: “Both macroecology and microbial ecology deal with the same currency: species and individuals. The two disciplines also have the same goal, namely to understand the causes and consequences of changes in biodiversity. Therefore, they both could benefit from a unified research agenda”. In addition to Chase, there are five more iDiv researchers among the authors, with backgrounds in both macroecology and microbiology. The first author of the study is Prof Ashley Shade from Michigan State University (USA). She adds: “We need to bring microbial ecology away from the fringe as a specialty sub-discipline and into the mainstream of ecology.  Microbes are the most diverse and specious organisms - starting from this perspective, their ecology should provide insights into the norms, not the exceptions”. In their publication, the researchers also discuss challenges in studying microbial communities at macroecological scales, but highlight how modern molecular techniques can help to overcome them. Tabea TurriniOriginal publication (iDiv researchers in bold): Ashley Shade, Robert R. Dunn, Shane A. Blowes, Petr Keil, Brendan J.M. Bohannan, Martina Herrmann, Kirsten Küsel, Jay T. Lennon, Nathan J. Sanders, David Storch, Jonathan Chase (2018): Macroecology to Unite All Life, Large and Small. Trends in Ecology and Evolution. DOI: https://doi.org/10.1016/j.tree.2018.08.005