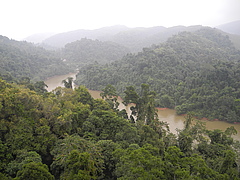 Based on a media release by the University of Amsterdam:

Gothenburg/Leipzig. Mountains are among the most biodiverse places on Earth, but scientists have struggled to fully understand why they are so important in creating high species richness. An international research team, including one scientist from Leipzig University and iDiv, has now shed new light on answering this long-standing question. The team found that mountain building, through a process of uplift and erosion, continuously reshapes the landscape and is responsible for creating habitat heterogeneity in an elevational gradient.The new findings have now been published in the journal Nature Geoscience. "The intricate relationships between growing mountains and climate offer many opportunities for the emergence of new species," says Alexandra Muellner-Riehl of Leipzig University. She is also member of iDiv and one of the authors of the paper. "Although climate and ruggedness of the terrain were previously thought to be the principal cause for mountain biodiversity, our global synthesis now makes clear that geological history plays a paramount role in this process," explains Carina Hoorn (University of Gothenburg/Harvard University), senior author of the paper. The team reached this conclusion by applying statistical models to biological, geological and climatological datasets from across the globe. "In our models, we related the species richness of birds, mammals and amphibians to global datasets of temperature, precipitation, erosion rates, relief and soil composition," says Daniel Kissling (University of Amsterdam) who conducted the statistical analyses of the paper. "I was surprised to find not only the usual correlations with climate, but a significant relation between biodiversity, erosion history, relief and number of soil types," continues Kissling. While the study shows that this is evident globally, it also revealed that the relationship can vary depending on which mountain system is considered. "This regional variation in the importance of geological drivers was really unexpected," says Kissling. The study further showed that geographic position (e.g. whether a mountain intercepts atmospheric currents or not) and the duration of mountain building process (young or old) are also important processes influencing biodiversity in mountains. On shorter geological time scales, Quaternary climatic fluctuations can also promote the creation of new species in mountains. "We suggest that the waxing and waning of glaciers, which has strongly reshaped the landscape and repeatedly connected and disconnected animal and plant populations, has played an important role for the creation of new mountain species," says Suzette Flantua who studied the effects of Quaternary climate change on mountain biodiversity in Latin America for her Ph.D. at the University of Amsterdam. The advances in geological methods and the increasingly complete global data sets on climate, soils, erosion history, and species richness only now have made it possible to gain such comprehensive insights into the relation between mountain building and biodiversity. The scientists are optimistic that with the new methods and datasets, further insights into the complex relationship between biodiversity, climate and mountain building can be expected in the near future. Original publication (researchers of UL/iDiv in bold): Antonelli, A., Kissling, W.D., Flantua, S.G.A., Bermúdez, M.A., Mulch, A., Muellner-Riehl, A.N., Linder, H.P., Badgley, C., Fjeldså, J., Fritz, S.A., Rahbek, C. Herman, F., Hooghiemstra, H. & Hoorn, C. (2018): Geological and climatic influences on mountain biodiversity. Nature Geoscience, DOI: 10.1038/s41561-018-0236-z
https://www.nature.com/articles/s41561-018-0236-zThe study was supported among others by the European Research Council (ERC), the German Science Foundation (DFG) and the sFossil workshop at the Synthesis Centre for Biodiversity Sciences (sDiv) at iDiv.Contact:Professor Alexandre Antonelli
Department of Biological and Environmental Sciences, and Director of the Gothenburg Global Biodiversity Centre
alexandre.antonelli@bioenv.gu.se
[in Brazil between 1-9 October but available by e-mail, or phone/skype contact upon agreement] andProfessor Alexandra Muellner-Riehl
Professor for Molecular Evolution and Plant Systematics
Leipzig University and member of iDiv
https://www.biphaps.uni-leipzig.de/en/sysbot/people/prof-dr-alexandra-muellner.htmlLinks: Press release by University of Gothenburg:
https://www.gu.se/english/research/news-detail//mountains-create-biodiversity.cid1587730 Press release by University of Amsterdam
http://www.uva.nl/en/shared-content/faculteiten/en/faculteit-der-natuurwetenschappen-wiskunde-en-informatica/news/2018/10/mountain-building-creates-biodiversity.html sDiv working group sFOSSIL - Integrating Phylogenies, Fossils and Earth System Dynamics
https://www.idiv.de/sdiv/working_groups/wg_pool/sfossil.html
« back to Archive 2018
Share this site on: