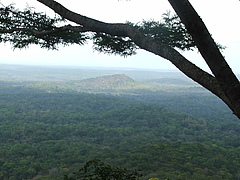 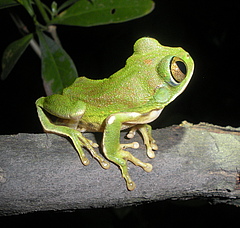 A juvenile Leptopelis flavomaculatus, one of the study species in the paper. Photo: Beryl Akoth Bwong 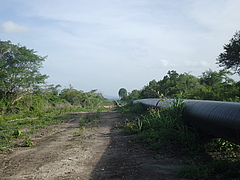 A newly built gas pipeline intersecting a patch of coastal forest patch near Ruawa Forest Reserve, highlighting the intense anthropogenic impacts on these threatened habitats and the urgency to protect them. Photo: Chris Barratt

Leipzig. A new paper published in Molecular Ecology shows how we can discern between competing hypotheses of diversification by supplementing spatial and genetic analyses with genomic (RAD-seq) data for multiple co-distributed species. By integrating molecular dating, habitat stability modelling throughout the Pleistocene and genome-wide SNP analyses we improve our understanding of biodiversity patterns and the evolutionary processes (e.g. isolation, migration, secondary contact and population expansions and contractions) shaping them. We demonstrate that processes are idiosyncratic across species, even for ecologically similar species with shared population boundaries. Our work offers an integrative hypothesis-testing framework that is useful for unravelling the complex nuances of diversification processes in biodiversity hotspots.

In the coastal forests of Eastern Africa biodiversity hotspot, high levels of species endemism and phylogeographic structure within species is assumed to be the result of the “vanishing refuge” diversification model. This model postulates that climate-driven habitat fragmentation has driven diversification by the simultaneous isolation of lineages in regions of long term stability (Pleistocene forest refugia) alongside with the exposure and adaptation of others to new (non-forest) environments. Although this has been a long-standing hypothesis for this region, it has not been sufficiently tested due to patchy geographic and taxonomic sampling and a lack of suitable high-resolution data to enable the robust detection and quantification of historical evolutionary processes. To address these shortfalls, we conducted targeted fieldwork across poorly sampled coastal forest patches, building a large DNA barcoding database of the entire amphibian assemblage and highlighting species containing multiple evolutionary lineages. We then selected seven candidate species for RAD-seq high-throughput sequencing and bioinformatic analysis.

We investigated high-resolution population structure across all seven species based on thousands of genome-wide SNPs. Based on this we employed a demographic model-testing framework to evaluate the likelihood of competing models of diversification. We built and tested up to 15 opposing models across two- and three- population divergences within each species, including parameters accounting for varying degrees of isolation, migration, secondary contact and population expansion/contraction. Our models can be broadly categorised as forest refugia models (allopatric divergence with evidence of secondary contact and/or population size changes), landscape barrier models (allopatric divergence with no subsequent migration) or ecological gradient models (parapatric divergence with ongoing or recent migration and/or size changes). Evaluating the fit of the empirical data to these models combined with results from molecular dating, Pleistocene habitat stability modelling and analysis of effective migration rates and genetic diversity allowed us to make integrative analysis of evolutionary processes across species in this biodiversity hotspot.

Our results show that even though phylogeographic patterns are congruent, processes are mostly idiosyncratic - even across ecologically similar species. We found that in contrast to previous assumptions, forest refugia are only partially supported as drivers of amphibian diversification in this region, with rivers and ecological gradients playing a major role in shaping diversity. These results improve our understanding of coastal forest biodiversity and demonstrate the clear advantages of genome-wide data to elucidate previously undetected evolutionary processes. Formally evaluating evolutionary processes in a rigorous hypothesis-testing framework is necessary to improve our understanding of how biodiversity accumulates and persists in highly diverse tropical habitats, and using this knowledge to predict biotic responses to future anthropogenic impacts and climate change. Chris Barratt