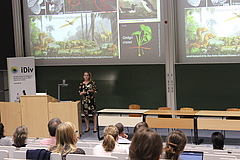 Jena. On Tuesday, the new iDiv junior group head Dr Renske Emilie Onstein gave her inaugural lecture in Jena. Onstein talked mostly about her own research, which focuses on how environmental conditions and plant traits interact to influence both plant speciation and extinction rates. Since June, Onstein is heading the new iDiv junior research group Evolution and Adaptation. After Onstein’s lecture, iDiv members met for the General Members Assembly (GMA).

Global change threatens biodiversity - especially in hotspots such as subtropical ecosystems and tropical rainforests. Can plants adapt to these changes or are they threatened with extinction? How has climate change influenced evolution in the past? In her inaugural lecture, Renske Onstein took the audience on a scientific journey to some of the world’s most biodiverse places – from mediterranean-type ecosystems to tropical rainforests. Onstein’s hypothesis: Evolution is triggered by the match between functional traits and environments - the right traits in the right place at the right time. If this match is disrupted, species are threatened with extinction. To test this hypothesis, Onstein combines genetic data, fossils and functional traits of plants.

Onstein presented research results showing the effect of megafauna extinction on palm trees. Onstein found that old-world palms, which depend on large animals for the dispersal of their seeds, adapted to global change, whereas new-world palms, which also depend on large animal species, have gone increasingly extinct since the beginning of the Quaternary 2.6 million years ago.