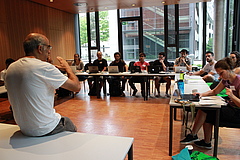 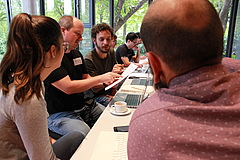 During the summer school, the participants developed their own projects (photo: Stefan Bernhardt/iDiv).

The 4th iDiv Summer School on “Ecological Theory and Modelling for the Biodiversity Crisis” took place from 20 to 31 August.

This year’s summer school was led by Prof Henrique Pereira, head of the Biodiversity Conservation research group at iDiv. From the pool of applicants, 15 young international researchers were selected to take part in the iDiv summer school. In hands-on sessions the students were trained in using modelling to address different topics in the area of biodiversity conservation. Neil Jun Lobite, a student from the University of the Philippines Los Baños said: “It has been a rewarding experience to attend the iDiv summer school and I really enjoyed the opportunity to learn about a wide range of ecological models as informed by ecological theory.” Dr André Große-Stoltenberg, a participant from Münster University, Germany, added: “The summer school was an excellent combination of theoretical input and practical classes about the latest methods in biodiversity modelling.” During the summer school, the participants developed their own projects that ranged from modelling optimal economic havesting of an Amazon freshwater fishery to modelling dynamics of invader/invaded species. The projects were presented in a final session on the last day of the Summer School. In addition to the indoor classes, Prof Pereira organised a scientific excursion to the Harz Mountains. The young researchers also appreciated the opportunity to meet and network with other iDiv scientists, for example at the “iDiv Summer Function” at the Botanical Garden. “I really appreciate being selected to participate in the iDiv summer school 2018,” said Leonardo Espinoza Rodriguez from the Austral University of Chile. “It also allowed me to get to know a high-level research centre and build new collaborative networks with other young researchers.” The iDiv summer school takes place every year under a different topic relating to biodiversity research that is chosen by the summer school leader of the respective year. Written by yDiv officeContactDr Nicole Sachmerda-Schulz
Coordinator of yDiv and the iDiv summer school
Web: https://www.idiv.de/ydiv/763.htmlProf Henrique Miguel Pereira
Head of the research group Biodiversity Conservation
German Centre for Integrative Biodiversity Research (iDiv)
Martin Luther University Halle-Wittenberg
Web: https://www.idiv.de/groups_and_people/core_groups/biodiversity_conservation.html
« back to Archive 2018
Share this site on: