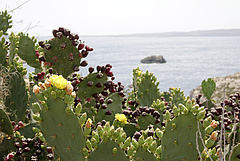 Cacti of the subfamily Opuntia originate from America, but are now also common in the Mediterranean region on islands like here in the picture on Malta. Photo: pixuslius/pixelio 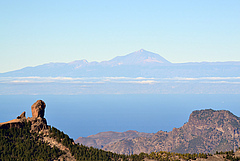 The greater the distance to the mainland, the greater the proportion of non-native species on an island, according to a new study. The Canary Islands are therefore particularly susceptible to invasive species. Photo: aepheikki/pixabay 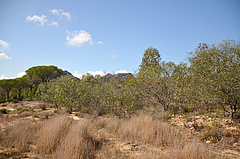 Eucalyptus trees in Sicily. The invasive species originates from Australia but has established itself in the Mediterranean climate. Photo: Marten Winter, iDiv

The further an island lies in the ocean, the larger the proportion of invasive species, according to the new study. Madeira has now more non-native than native plant species. Photo: FF16/pixabay

Vienna/Leipzig. The effects of island remoteness from the mainland on the number of species found on islands differs strongly for non-native compared to native species. Numbers of native species on islands decrease with greater remoteness, while numbers of non-native species increase. This surprising finding has been uncovered by an international research team led by Dietmar Moser, Bernd Lenzner and Franz Essl from the Department of Botany and Biodiversity Research of the University of Vienna and involving iDiv scientist Marten Winter. The study has been published in the prestigious scientific journal “Proceedings of the National Academy of Sciences of the U.S.A”. These findings have important implications for our understanding global biodiversity. It is widely accepted that island floras and faunas suffer from the introduction of non-native species, with almost every third extinction event on islands being directly or indirectly related to non-native species. Since many native island species are endemic – meaning they are exclusively present on “their own” island and found nowhere else on Earth – the introduction of non-native species poses an imminent threat to global biodiversity. To understand why some islands are more strongly affected than others by non-native species, the team analysed the effect of a number of influencing factors on the number of native and non-native mammals, reptiles, ants, birds and plants on 257 subtropical and tropical islands. The results confirm the existence of long-suspected relationships, for example between the size of an island and the number of native and non-native species present. However, Dietmar Moser explains: “What really surprised us was to see that the isolation of an island – its distance from the mainland – had opposite effects on native and non-native species richness. Native species declined whereas non-native species numbers increased with isolation”. His colleague Bernd Lenzner adds: “With increasing distance to the mainland, native species become more evolutionary isolated and ecologically distinct. This results from the fact that only some species are able to disperse over such long distances, and also from the fact that successful colonizers have become genetically adapted to the specific conditions of the island”. For example, many species have lost their behavioural or defence strategies that would reduce the risk of being eaten, in response to a lack of predators on the island. But, some non-native species may be successful on remote islands by predating on these naive natives, or they may be better able to exploit multiple resources on the remote islands while native species are not able to do so, due to evolved specialization. For the same reason, natives may not be able to exploit human-modified habitats on more isolated islands, while non-native species are able to do so. Marten Winter from the iDiv research centre in Leipzig says: “Newly introduced species often have very adaptable characteristics. They can establish themselves more quickly, expand, use existing resources more efficiently and are therefore so often the more assertive competitors or even more successful predators".  Overall, the scientists show that more remote islands that tend to have more distinct floras and faunas are at greater risk from the human introductions of non-native species. With the exception of birds, this pattern was consistent for all groups analysed. This means that biological invasions not only threaten many different species, but they especially threaten those that are unique to remote islands. As a result, Dietmar Moser recommends that “especially on remote islands, strict actions against the introduction of non-native species need to be implemented”. Original publication (iDiv scientist in bold):
Moser D, Lenzner B, Weigelt P, Dawson W, Kreft H, Pergl J, Pyšek P, van Kleunen M, Winter M, Capinha C, Cassey P, Dullinger S, Economo EP, García-Díaz P, Guénard B, Hofhansl F, Mang T, Seebens H, Essl F (2018) Remoteness promotes biological invasions on islands worldwide. Proceedings of the National Academy of Sciences (PNAS), DOI: 10.1073/pnas.1804179115
http://dx.doi.org/10.1073/pnas.1804179115