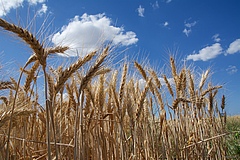 Wheat is a staple food for over one-third of the world’s population (picture: Isabelle Caugant, IWGSC Picture Library).

A thirteen-year scientific effort has culminated in a paper published in the journal Science: over 200 scientists from 73 research institutions in 20 countries joined forces to map the genome of bread wheat. iDiv member Martin Mascher from the Leibniz Institute of Plant Genetics and Crop Plant Research (IPK) in Gatersleben also played a leading role. It is hoped that the findings will open up new prospects for feeding the world’s population.

The sequence published in Science is the first nearly complete reference genome of wheat – a key tool for understanding, researching or improving the grain.

"It was long believed that it was impossible to sequence the bread-wheat genome in its entirety, because it is massive and complex," says Dr. Nils Stein, Head of the Research Group Genomics of Genetic Resources at the IPK in Gatersleben, in explanation of the challenge. "The wheat genome, five times bigger than the human genome, is divided into three subgenomes and is distributed over 21 chromosomes with numerous repeated elements."

As not even cutting-edge techniques are able to unravel the full length sequence of the genome, researchers had to improvise using sequenced genome fragments. The difficulty was to understand how the sub-sequences are arranged. To address this problem, the scientists developed special algorithms and new strategies to master this quintessentially ‘big data’ challenge.

"Once the final sequence was known, it was all about elucidating the content," explains Dr. Manuel Spannagl, Group Leader in the Research Unit Plant Genome and Systems Biology at Helmholtz Zentrum München. "Our task was to determine where, among billions of bases, specific genes are located and how they are organized: we were able to identify 107,891 genes*. In addition, more than four million molecular markers were annotated as well as regions between the genes that affect their activity."

iDiv member Dr. Martin Mascher from the IPK Gatersleben, together with international partners, was leading the construction of sequence assemblies representing entire chromosomes from start to end. "Putting together the genome sequence of bread wheat was a big challenge”, Mascher says. “This is because the genome is five times larger than the human genome and full of repetitive elements.” However, taking advantage of the recent progress in genome assemblies methods, the researchers were able to finally solve this problem. Their results will help to advance both science and industry, Mascher says: “The wheat reference sequence will be an invaluable tool for scientists and breeders, who can now easily search for their genes of interest in online databases.  Ultimately, this will speed up crop improvement and may make an important contribution to ensuring food security in a changing environment."

The study authors who are all involved in the International Wheat Genome Sequencing Consortium (IWGSC) hope that their work will now lead to new wheat varieties that are better adapted to climatic challenges, deliver higher and, above all, more stable yields, and are even more nutritious. A further aim is to make the cultivation and utilization of wheat more sustainable. Wheat, after all, is and will remain a crucial crop for global food security: It is a staple food for over one-third of the world’s population and supplies almost 20 percent of the carbohydrates and proteins in people’s diet – more than any other food.

Six other papers accompany the publication of the complete wheat reference sequence, highlighting its benefits for the scientific community. Since a first working version of the complete sequence was released in January 2017, over 100 research papers based on the preliminary data have been published. That number is now expected to soar.

But, according to the German scientists, there’s still a lot of work to do: The now fully-sequenced and annotated ‘Chinese Spring’ wheat variety has been used around the world, mainly in basic research. Other lines which are frequently used among breeders and which characterize the genetic diversity of bread wheat, referred to as the pan-genome, are already being intensively pursued.**

* By comparison: 20,376 genes are currently known in humans.

** Researchers from Munich and Gatersleben are sequencing the ‘Julius’ variety of wheat in the WHEATSEQ project, which is funded by the German Federal Ministry of Food and Agriculture (BMEL) (funding reference: 2819104015). The work is part of the international “10 Wheat Genome Project”, a program associated with the International Wheat Initiative. The program will provide detailed insight into the structural diversity and complexity of the wheat pan-genome and provide a basis for developing new wheat varieties.

Wheat is a staple food for over one-third of the world’s population. It also serves as an important source of vitamins and minerals. According to the statement from the IWGSC, "The wheat code is finally cracked". In order to meet the future needs of a projected world population of 9.6 billion (by 2050), wheat productivity has to increase by 1.6 percent per year. To conserve biodiversity as well as water and nutrient resources, most of this increase must be achieved by improving the crops themselves and their characteristics and by growing them on existing farmland rather than exploiting new land for cultivation.

Press release by the Helmholtz Zentrum München and the Leibniz Institute of Plant Genetics and Crop Plant Research (IPK) Gatersleben: