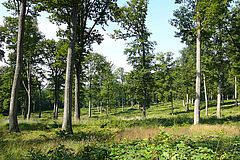 Scientists have sequenced the genome of the pedunculate oak

An international consortium driven by theFrench National Institute for Agricultural Research INRA and the French Alternative Energies and Atomic Energy Commission CEA has sequenced the genome of the pedunculate oak. The work recently published in Nature Plants, which also involved three researchers from Central Germany, reveals two main genomic features related to the longevity of this emblematic species. The first is the existence in the genome of a particularly rich and diverse set of genes involved in resistance against pests (fungi, oomycetes, insects, bacteria and viruses). This extended defense arsenal affords trees protection against their dominant predators and is likely a key to their longevity. The second feature revealed by the work is the existence of somatic mutations that can be transmitted to the next generation - a result that raises questions about the importance of somatic mutations (non germ line) in generating genetic diversity in long-lived species.

Trees contribute greatly to our natural and cultural heritage. In addition to being ubiquitous in our most common landscapes, they also provide humans with invaluable services. In past and present human societies, their longevity and ability to withstand environmental changes made them important symbols in sacred, mystical and popular representations of stability, resistance and the perpetuity of life.

A reference genome for one of the 400 oak species

Scientists from France, Sweden, Spain, the USA and Germany jointly investigated the genetic bases of longevity of trees. They started their investigation by sequencing the genome of the common oak using high throughput sequencing technologies. This allowed them to sequence and assemble the 750 million nucleotides, that make up the genome of this wide-spread European species, whose genetic diversity is ten times greater than that of humans.

The annotation of the oak genome, locating and determining the likely function of all genes (done by comparison with other species), showed that it is enriched with transposable elements (DNA sequences that move within the genome) at 51% of total DNA and contains 26,000 genes. Among these genes, 36% are organized in clusters of continuous genes (so called tandem duplicates); this number is much higher than found in other plants at ca. 15 %. The investigators also showed that the number of resistance genes in oaks increased mostly via tandem duplication. The comparison between the genomes of herbaceous species (Arabidopsis, soybean, potato, watermelon…) and perennial woody species (oak, poplar, eucalyptus, peach tree…) demonstrates that this expansion of resistance genes is not specific to oaks, but shared among all tree species investigated. As trees remain living across years, they are continually barraged by pests; these pests likely evolve faster than their tree hosts due to their much shorter generation times. In these conditions the diversity and richness of immunity genes could help trees to cope with a broad range of short-lived microbial enemies and help them to persist and live longer.

Multi-cellular organisms accumulate somatic mutations as they grow. The extremely long life of trees, often reaching hundreds of years for some species, and the persistence of tissue produced across their lives makes them perfect models to investigate this phenomenon. The team investigated the frequency of somatic mutations by comparing the genomes of samples harvested at the extremities of branches of different ages on a centennial oak tree. This strategy allowed the researchers to identify rare somatic mutations, but also to show that they can be transmitted to the next generation. The next step will be to determine the importance of this mechanism in generating genetic diversity in populations and whether some of these mutations can confer individuals with a selective edge.

Three scientists from the UFZ-Department Soil Ecology in Halle (Saale) participated in the international consortium; Dr Marie-Lara Bouffaud is a postdoctoral researcher at the German Centre for Integrative Biodiversity Research (iDiv) and Dr Sylvie Herrmann and Dr Mika Tarkka are iDiv members. They contributed by annotating genes related to the ectomycorrhizal symbiosis between roots and soil fungi, in particular those involved in sugar exchange between the partners. The team from Halle also provided to the project large gene expression data from a library constructed during interaction studies between a number of microorganisms and animals displaying beneficial or detrimental interactions with oak leaves or roots. Basis for this research was an own clone of the common oak micro-propagated since years at the UFZ. "The two traits revealed e.g. the high amount of genes involved in resistance against pests and the high level of transposons and potential of somatic mutations may provide keys to understand how a species with so many different biotic interactions makes it to have one of the broadest geographic distributions among all European forest trees. It reinforces the value of releasing our own oak clone as phytometer among sites in Europe to study how long lived organisms adapt to environmental variations" says Dr. Sylvie Herrmann from the UFZ Halle.