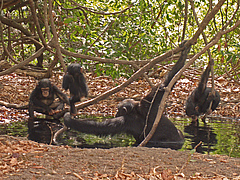 Chimpanzees living in the savanna and grass savanna have adapted their behavior to their difficult living conditions: To protect themselves from overheating, they use water sources for taking a bath. photo: Erin Wessling

In Fongoli, Senegal, the average temperature during the dry season is 37 degrees Celsius. photo: Erin Wessling

Regulating their body temperature to prevent overheating is a burden for chimpanzees living in the African savannaText based on media release by the Max Planck Institute for Evolutionary AnthropologyLeipzig. When humans started settling in more open and hot habitats during their evolution, they had to adapt to the new environmental conditions and, possibly, to develop protection against overheating and to find ways to consume enough food for their survival. An international team of scientists from the Max Planck Institute for Evolutionary Anthropology and iDiv has studied the physiological parameters of savanna and rainforest chimpanzees in two studies and compared their water and energy budgets as well as their stress levels. They found that the stress of maintaining their body temperature is a tremendous burden on chimpanzees living in the savanna. During their evolutionary history hominins underwent physiological and behavioral changes to cope with and adapt to more open and hotter environments. These changes include increased sweat capacity and loss of hair coverage, but are difficult to pinpoint using the fossil record as such changes do not fossilize. Even bipedalism, the defining hominid characteristic, has been argued by some to be linked with the transition into savanna environments. In a paper, the researchers demonstrate that a group of savanna-dwelling chimpanzees showed significant physiological difficulty when temperatures were high and water was scarce. They used a series of physiological biomarkers, or indicators of a particular biological state, collected from the chimpanzee’s urine at Fongoli, Senegal, a community located in the savanna-woodlands at the northern-most limits of the chimpanzee range. „The weather at Fongoli can be brutal, where the average maximum temperature is over 37 degrees, and periods go by each year when rain doesn’t fall for over seven months,“ says Erin Wessling of the Max Planck Institute for Evolutionary Anthropology and lead author of both studies. The researchers found that chimpanzee creatinine (a muscle by-product which indicates hydration status) and cortisol (a hormone involved in stress response) levels, indicated that the chimpanzees were likely dehydrated and suffered from thermoregulatory stress during the late dry season when temperatures reach over 45 degrees and it has not rained for many months, and that these two stressors likely magnified the other. They also found that Fongoli chimpanzee c-peptide levels (a peptide of insulin indicative of energetic status) varied according to food availability within the study period, however, these chimpanzees were able to avoid serious energetic stress. “This really supports the idea that the strongest challenges of habitats like these savanna, savanna-woodland environments are staying adequately hydrated and cool,” says Wessling. “If we are thought to have evolved in similar habitats, then this underlines the importance of adaptations for overcoming or avoiding thermoregulatory stress in our own evolutionary history. As a next step, it would then be important to show that these stresses are not only important, but also unique to these types of habitats.” So in a follow-up study, Wessling and co-authors compare their results of biomarker variation in chimpanzees at Fongoli, with the same biomarkers from urine collected from chimpanzees in Taï National Park, a lowland rainforest in Ivory Coast. Chimpanzees at Taï are expected to have it easier, with average temperatures around a comfortable 26 degrees, and almost twice as much rainfall in the year. Wessling and colleagues found that chimpanzees from the rainforests of Taï did not show the same degree of variation in cortisol as Fongoli chimpanzees did, suggesting that thermoregulatory stress was a unique constraint to chimpanzees in more open, hotter environments. Wessling and colleagues also showed that food availability was indeed lower in the savanna than the forest site but the Fongoli chimpanzees were more stable in their energetic status than the chimpanzees from the rainforest, suggesting that these chimpanzees have already developed strategies to cope with potential food scarcity, such as a heavier dependence on foods other than fleshy ripe fruits (a chimpanzee favorite) like termites, flowers, and bark. “What this suggests is that these chimpanzees have already developed behavioral mechanisms for coping with this environment in a number of different ways,” Wessling adds.
Thermoregulation was also relevant to hominins. Assuming that the mechanisms observed with chimpanzees on the savanna may have shared similarities with the ones of hominins moving into more open environments, the results suggest that there would have been serious need for developing evolutionary adaptations for overcoming thermoregulatory challenges, which outweigh the need for adaptations for food scarcity. „The Fongoli chimpanzees, for example, have demonstrated several extraordinary behaviors suspected for dealing with the savanna heat, such as cave use, sitting in pools, and nocturnal activity,“ says Wessling. „However, despite these behaviors, they still show signs of dehydration and thermoregulatory stress, suggesting more dramatic adaptations, such as anatomical changes, may be needed to completely evade such pressures.“ However, the reaches of this study extend beyond theories of hominid ecology and evolution, but also offer insights into future change scenarios which may challenge the survival of the species as a whole. “In view of the ongoing climate change, we are now better able to understand what the consequences for the critically endangered western chimpanzee may be in the near future, with regard to increased ecological pressures and necessity to adapt flexibly, to the overall habitability of regions at the limit of their distribution and even potential range shifts,” concludes co-author Hjalmar Kühl of the Max Planck Institute for Evolutionary Anthropology and iDiv. Original publication Wessling EG, Deschner T, Mundry R, Pruetz JD, Wittig RM and Kühl HS (2018) Seasonal Variation in Physiology Challenges the Notion of Chimpanzees (Pan troglodytes verus) as a Forest-Adapted Species. Front. Ecol. Evol. 6:60. doi: 10.3389/fevo.2018.00060ContactDr Hjalmar Kühl
Head of the Research Group 'Sustainability and Complexity in Ape Habitat'
German Centre of Integrative Biodiversity Research (iDiv) Halle-Jena-Leipzig
Max Planck Institute for Evolutionary Anthropology (MPI-EVA)
Phone: +49 341 3550236
Email: kuehl@eva.mpg.de
Web: www.idiv.de/en/groups_and_people/employees/details/eshow/kuehl_hjalmar.htmlDr Volker Hahn
Media and Communications
German Centre for Integrative Biodiversity Research (iDiv) Halle-Jena-Leipzig
Phone: +49 341 9733154
Email: volker.hahn@idiv.de
Web: www.idiv.de/en/groups_and_people/employees/details/eshow/hahn_volker.html
« back to Archive 2018
Share this site on: