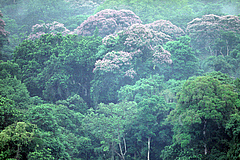 Tree giants produce few seeds, but do so for centuries. Photo: Christian Ziegler 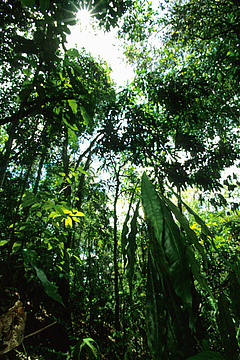 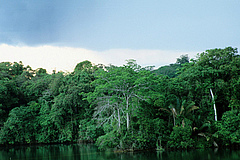 Data for the new study were collected at Barro Colorado Island in Panama. Photo: Christian Ziegler

Leipzig. Tree species can either grow rapidly and enjoy a long life, and thus grow very tall, or they can produce lots of offspring – but not necessarily do both. We now have evidence that these two extreme types of strategy exist among tropical tree species. Trees in the tropics therefore pursue survival and reproductive strategies that lie between these two extremes. Our newly discovered ‘strategic axis’ adds to one that has long been known – that species differ only on the basis of their pace of life. Our findings were recently published in the journal Ecology Letters. It is important to understand the ecological strategies of trees in order to make better predictions about the development of forests, and support their sustainable use.

Living creatures have to carefully make use of the limited resources that are available to them, in order to properly fuel different vital life processes like growth, survival, and reproduction. It is important to grasp how tropical tree species balance these functions in order to understand and predict how global change alters tropical forests. In order to explore this question, our team from Germany, Panama, the UK and the USA has compared and contrasted the growth, survival and regeneration rates of 282 species in a tropical rainforest in Panama. We have also included many rare species, thanks to a new statistical procedure (the species were weighted relative to the reliability of their demographic information).

It has been known for a long time that, like animals, different species of plants also differ in their pace of life. While ‘fast’ species grow rapidly and die quickly (an example from Europe is silver birch), ‘slow’ species grow slowly and reach old age (e.g. European beech). Our study has now revealed a second – separate and independent – axis along which species can vary. At one extreme, we find ‘infertile giants’ (also called ‘long-lived pioneers’, e.g. common oak or mahogany). These are species that grow rapidly and live a long time, and as a result grow very tall, but produce only a few offspring per year. They compensate for this small number of offspring by surviving a long time as forest giants and producing seeds for centuries in the hope that one of them will ultimately become the next forest giant.

The ‘fertile dwarfs’ are the counterpart of the ‘infertile giants’. These are small shrubs or treelets that grow slowly and do not live very long, yet produce a large number of offspring. In other words, the second axis describes a trade-off between maximum height and posterity, i.e. one of these properties is optimised at the expense of the other. In the tropics, many relatives of pepper are fertile dwarfs.

We were surprised to find ourselves able to estimate the ecological strategies of tree species relatively well (around 50%) by measuring simple species characteristics, e.g. wood density and maximum height. If our results can also be confirmed in other forests, this would mean that we could almost predict the ecological strategy of tens of thousands of tropical tree species that we know little about. Achieving this would therefore bring us a great deal closer to our objective of better predicting the development of the world’s tropical forests and supporting their sustainable use. Nadja Rüger