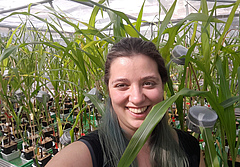 Esther-Marie Lintzel, master student from the University Leipzig, starts her master thesis. She already worked with us as research assistant and in a pre-thesis module since last year. Her work will be supervised by Ainhoa Medina-Martinez and Nico Eisenhauer, head of EIE, and focuses on root-fungi interaction with their effect on aboveground plant defenses. Specifically, she will look at influences by the fungi Rhizophagus and Trichoderma in maize plants being attacked by the moth Spodoptera exigua and compares different domestication stages of this agricultural monocot.